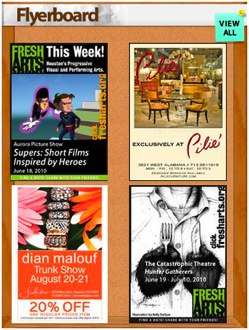 To say that local and hyperlocal news is going through an adjustment period is quite the understatement.

Everyone, from traditional newspaper publishers to younger initiatives like AOL’s rapidly expanding Patch network, is trying to crack the monetization code. PaperG’s Flyerboard, an online advertising platform for local ads, doesn’t have the answer, but they’re trying to be part of the solution and make a lot of money along the way.

PaperG’s Flyerboard is effectively a virtual bulletin board, the standard design even mimics the appearance of fliers on a corkboard. A local retailer submits an image and some basic information and Flyerboard automatically converts that data into an interactive ad that can be easily shared via social networks, like Facebook and Twitter, or e-mail. Through the ad platform, publishers can quickly post and manage their ads, look at analytics, and bill clients. Here’s a look at a Flyerboard widget on a hyperlocal site for Boston.com, the Boston Globe’s website: 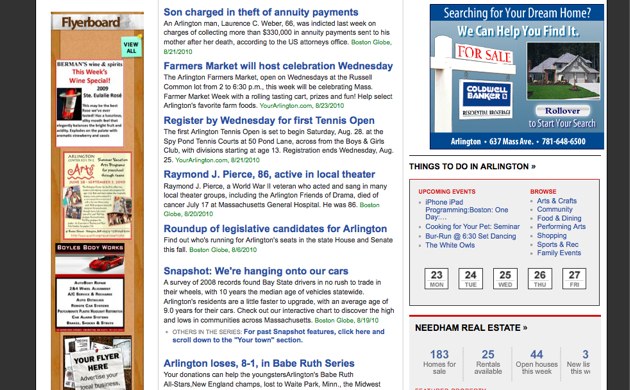 When a user clicks on one of the “fliers,” a larger image of the ad pops up with additional information, a link to the advertiser’s website, a map of the location, social network buttons and a way to send the ad to friends via e-mail: 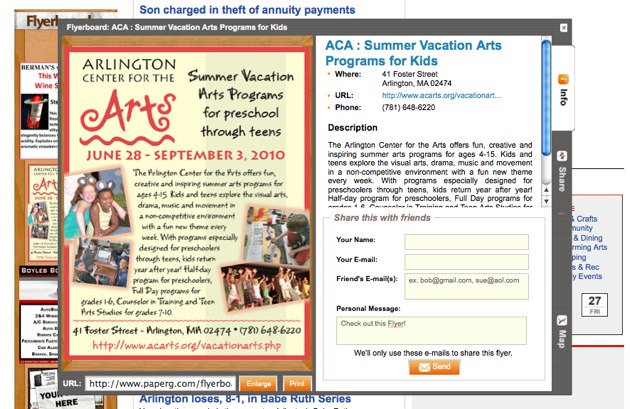 The economics are simple.

In order to get access to the Flyerboard service, a publisher signs a revenue-sharing contract with PaperG— on average PaperG takes a 20 to 30% cut of sales. And depending on the publisher’s prices, the advertiser’s rate generally ranges between $150 to $400 per week.

For a large website like the Houston Chronicle’s Chron.com or Boston.com, which has dozens of hyperlocal sites, it’s an easy way to expand and manage local advertising with a clean user interface. The Houston Chronicle, which debuted their Flyerboard widget last year, reported $100,000 in new sales in their first month of using the product. As more partners come on board (and at a 20-30% share rate) that translates into strong revenues for PaperG. According to the startup’s CEO, Victor Wong, annual revenues are in the millions and revenues have been growing 70% quarter to quarter over the past year.

Clearly, cash— in the near term— is not going to be an issue for PaperG (the company has also secured $1.1 million from LaunchCapital, Brian O’Kelley, Mark Potts and Steve Tyler). The trick will be staying relevant in this rapidly changing space, where publishers are devising homegrown ad solutions, new hyperlocal advertising platforms are emerging from traditional and non-traditional players, and hyperlocal upstarts are still crafting their business strategies (for example, PaperG has had conversations with Aol’s Patch, but they haven’t signed a formal deal yet).