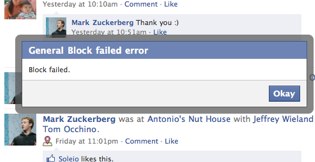 The title of this post kind of says it all. As pointed out by blockzuck.com, you can block anyone on Facebook except CEO Mark Zuckerberg. If you try to do it (we did), you’ll get a message saying “General Block failed error: Block failed.”

This kind of thing is funny, and adds a little personality to the site. But Facebook is getting way too big and culturally important for things like this to continue. In 2005 it was cool for Zuckerberg to have a business card that said “I’m CEO…Bitch.” And we can forgive early Facebook engineers from perusing confidential user data in their leisure time. But it’s time for this company to go through puberty and start acting more like a teenager than a fifth grader. If you want to block Zuckerberg, you should be able to block Zuckerberg.