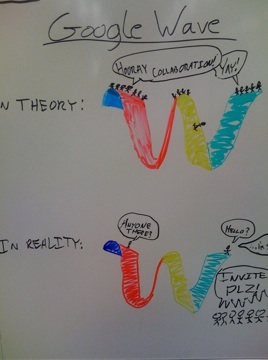 Maybe it was just ahead of its time. Or maybe there were just too many features to ever allow it to be defined properly, but Google is saying today that they are going to stop any further development of Google Wave.

Wave, a real time messaging platform, was unveiled in May 2009 to an enthusiastic crowd of developers at the Google I/O event in San Francisco. It would “set a new benchmark for interactivity,” said Sergey Brin.

The product is part email, part Twitter and part instant messaging. Users can drag files from the desktop to a discussion. Wave even showed character-by-character live typing. It fully launched this last May.

And while the service has many, or at least some, passionate users (including TechCrunchers), it “has not seen the user adoption we would have liked,” says Google.

The service will remain live, says Google, although they say it may eventually come down. Google has also open sourced parts of the code and say they will create tools to let users “liberate” their data: “The central parts of the code, as well as the protocols that have driven many of Wave’s innovations, like drag-and-drop and character-by-character live typing, are already available as open source, so customers and partners can continue the innovation we began. In addition, we will work on tools so that users easily “liberate” their content from Wave.”

What happens to the Wave team, mostly located in Australia? Google won’t say, other than that they will be given new projects. Our guess is many, or all, of them will soon be working for Vic Gundotra and his new WWF (war with Facebook).