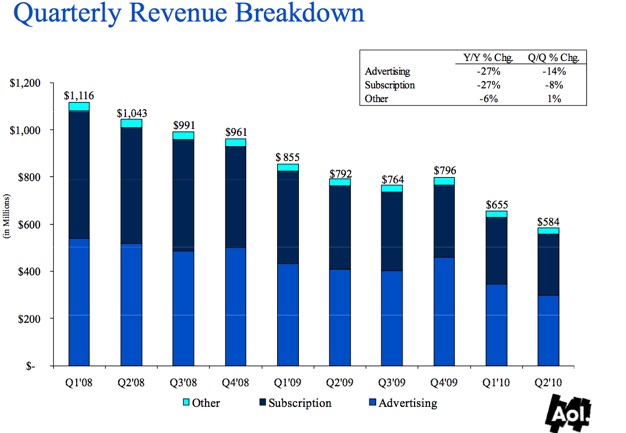 AOL took another hit in revenues last quarter, with total sales dropping to $584.1 million compared to $664 million in the first quarter of 2010 and significantly down from $791.5 million in the same period last year.

Wall Street consensus was total revenue of $602 million for the quarter, so they failed to meet expectations by a margin.

On a slightly more positive note, the company has managed to reduce costs in Q2 2010 as operating expenses declined $131.6 million year-over-year and $73.2 million sequentially.

But AOL swung to a Q2 loss of $1.06 billion, or $9.89 a share, from net income of $153.7 million, or 86 cents a share, in the year-ago period. Its loss included a significant goodwill impairment charge of $1.4 billion related to its sale of Bebo and decline in its stock price. Without the goodwill charge, which is purely an accounting event, the company would have reported $0.66 earnings per share.

The company sold social network Bebo in June for approx. $10 million, to hedge fund Criterion Capital Partners. AOL had paid $850 million for the company back in 2008.

In April, AOL also sold instant messaging service ICQ to Russian investor DST for $187.5 million. According to the press release, the company also just sold its stake in Kayak.