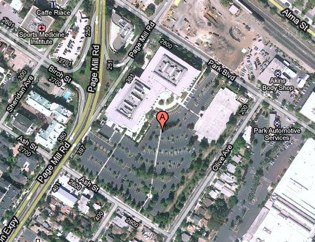 Google apparently has a lot of empty office space in Silicon Valley laying around under long term leases. One three story building – all 225,000 square feet of it – was just subleased by Google to AOL. AOL will be moving their Silicon Valley office, currently in Mountain View, to the new location at 395 Page Mill, Palo Alto, CA.

That’s just down the street from Stanford University, and just a block away from a new Chipotle. Apparently parking won’t be a problem either, based on the satellite image.

AOL only needs a third of the space they’ve leased and are moving into the third floor. But instead of leasing a smaller building, they decided to take far more than they need and sublet to startups, Brad Garlinghouse tells me. Garlinghouse is the most senior AOL exec on the west coast – see my recent video interview with him here.

SSE Labs, a Stanford affiliated organization that operates an incubator, has already signed up to move in. Other companies are moving in as well, says AOL, but they are looking for more startups. Interested? Email Trent Herren at trentherren@aol.com to get the details.

Why all the bother? Garlinghouse says he wants the energy of the startups to rub off on AOLers: “In addition to creating a new convenient space for our AOL employees – we’re all about fostering a culture around creativity and new ideas which is why we plan to sublease our space to entrepreneurs and start-ups in the valley.”

AOL says they’ve used the same architectural design firm to build out the space that Facebook, Yelp and others have tapped. More details on the sublease from Google here from a July 25 article in the San Francisco Business Times.