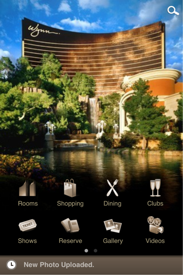 Mobile Roadie, a startup that helps anyone develop and create iPhone and Android apps, has launched a more customizable version of their app builder today, called Mobile Roadie Pro.

The idea Mobile Roadie Pro is to offers clients more creative control over the development of their app, offering customization of menu layout, colors, buttons, and fonts. Pro also supports multiple categories of content, a global search for users, and newly designed landscape views. And the functionality that is included in Mobile Roadie’s basic app creator is also available. For example, the apps can feature integration with YouTube, Brightcove, Flickr, Twitpic, Ustream, Topspin, Google News, RSS, Twitter, and Facebook.

Mobile Roadie has been testing the Pro version of the platform with a number of branded apps, including one for the hotel Wynn in Las Vegas. The app allows users to explore the rooms in the hotel, make reservations, read the restaurant menus and reserve a table, and learn more about nightlife, shopping, and entertainment options in the area.

Mobile Roadie’s pricing starts at $499 to setup and $29 per month. The company says that using the platform requires no tech knowledge, and apps can be created in about 30 minutes. And another bonus of Mobile Roadie’s platform is that its CMS allows users to simultaneously make updates to both their iPhone and Android Apps. And using push notifications, customers can send alerts that appear on users’ screens, geo targeting messages down to a one-mile radius.

For a fledgling startup, Mobile Roadie has been able to attract a number of high profile brands and celebrities using its platform, including Taylor Swift, Madonna, Live Nation, Levi’s, Twilight, and Vera Wang. Mobile Roadie also developed the official iPhone app for LeWeb, the foremost European technology conference organized by French entrepreneur and Seesmic founder, Loic Le Meur and his wife, Geraldine. The app was a huge hit at the conference. Mobile Roadie also recently struck a deal with Random House to power iPhone apps for authors.