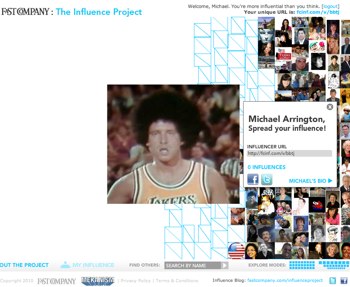 Something tells me that Fast Company’s Comscore numbers are going to shoot way up in July. I’ve seen some audacious things before, but this is the most ingenious link bait pyramid scheme I’ve come across to date: The Influence Project.

It’s a contest to find the most influential people online. To compete you give them a picture of yourself and they give you a unique link to Fast Company. To win you get people to click on that link. The more clicks, the bigger your picture gets among the hordes of others:

We started with a simple question: Who are the most influential people online right now?

That’s what The Influence Project is designed to answer. By participating, you will have your picture appear in the November issue of Fast Company magazine as part of an amazing photo spread. The more influence you demonstrate, the bigger your picture will be.

You may discover that you’re more influential than you think.

Influence is not only about having the most friends or followers. Real influence is about being able to affect the behavior of those you interact with, to get others in your social network to act on a suggestion or recommendation. When you post a link or recommend a site, how many people actually bother to check it out? And what’s the likelihood of those people then forwarding it on? How far does your influence spread?

This is the type of influence we’re looking for. We want to find the most influential person online.
Who knows? It might even be you.

Yes, this is a contest to see who can send the most traffic to Fast Company. And the winner gets to have a big picture in the November print issue. I’m guessing the most influential person will also be on the cover.

The best part is the pyramid scheme bolted on top – you get extra influence if people sign up for the project after clicking your link.

HOW WE MEASURE INFLUENCE

The scale of your influence, and therefore the size of your photo, is based on two measures.

1. The number of people who directly click on your unique URL link. This is the primary measure of your influence, pure and simple.

2. You will receive partial “credit” for subsequent clicks generated by those who register as a result of your URL. In other words, anyone who comes to the site through your link and registers for their own account will be spreading your influence while they spread theirs. That way, you get some benefit from influencing people who are influential themselves. We will give a diminishing, fractional credit (1/2, ¼, 1/8 etc ) for clicks generated up to six degrees away from your original link.

I’ve accidentally nominated Chevy Chase from Fletch (video clip here) to be the most influential person online. It’s currently my Facebook picture (in honor of the Lakers winning the championship), and the handy Facebook Connect sign up form just made it all so easy. I don’t have any real hopes of winning, though. This Fast Company article from 2008 tells me all about how there’s no such thing as influencers anyway.

Err, what? Then why the contest? Yeah nevermind. We’ve got links to click. Join me in my quest to put Chevy Chase, with an afro, on the cover of Fast Company Magazine. My work will then be done here.

And join us next week at TechCrunch when we’ll hold a contest to see who can click the most ad units on our site. Winner gets called “The Most Awesome Person Online” and we’ll put their picture on our home page for a day! And a free tshirt!