Clean technology remains one of the hottest areas of venture funding. In the second quarter, cleantech venture investments worldwide totaled $2.02 billion across 140 companies, according to market research firm Cleantech Group and Deloitte. The numbers are in line with last quarter’s $2.04 billion, but 43% higher than one year ago.

Exits for the quarter totaled more than $8 billion globally, with $6 billion in cleantech M&A and $2.3 billion in cleantech IPOs. Tesla‘s $202 million IPO has been in the spotlight recently, but globally, the cleantech IPO market is concentrated in China, which grabbed $1.7 billion, 75 percent of the $2.3 billion raised worldwide in the past three months, and 12 of the 19 IPOs, though not all of those are venture backed. The biggest IPO of the quarter was China’s Origin Water on the Shenzen Stock Exchange, which raised $330 million. As a point of comparison, in the U.S. alone, IPOs across all sectors totaled $900 million in the second quarter. 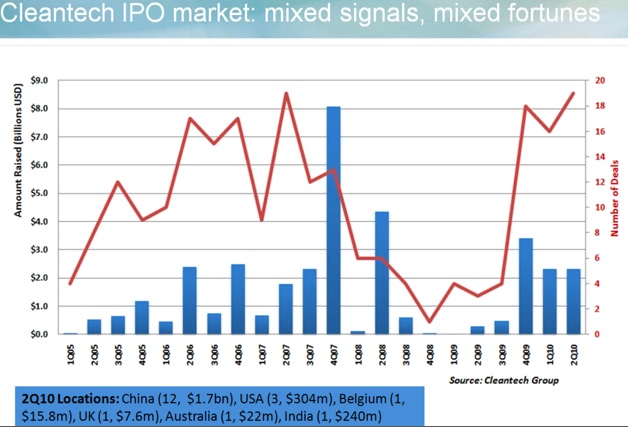 In terms of venture funding, the most active cleantech investors in the quarter were Carbon Trust Investment Partners (6 deals), Kleiner Perkins (4 deals), Angeleno Group (3 deals), Draper Fisher Jurvetson (3 deals), and Khosla Ventures (3 deals). Mega-deals of $100 million or more are on the rise, with four such deals in the quarter, including $175 million for Solyndra, $165 million for Landis+Gyr, $115 million for BrightSource Energy, and $129.4 million for Amonix.

The industry sectors drawing the most dollars were solar, biofuels, and smart grid. Solar is one of the industry’s brightest shining stars, grabbing $811 million to mark its third highest quarter in history. 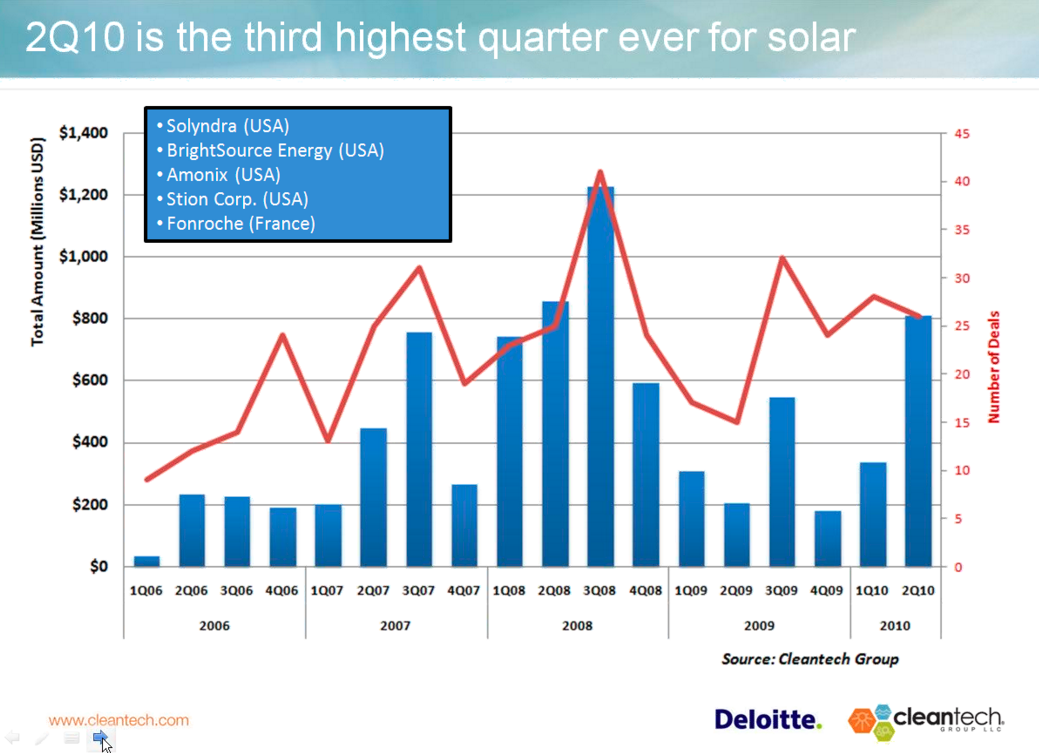 Investment in biofuels was also strong, soaring to $302 million since the the first quarter. 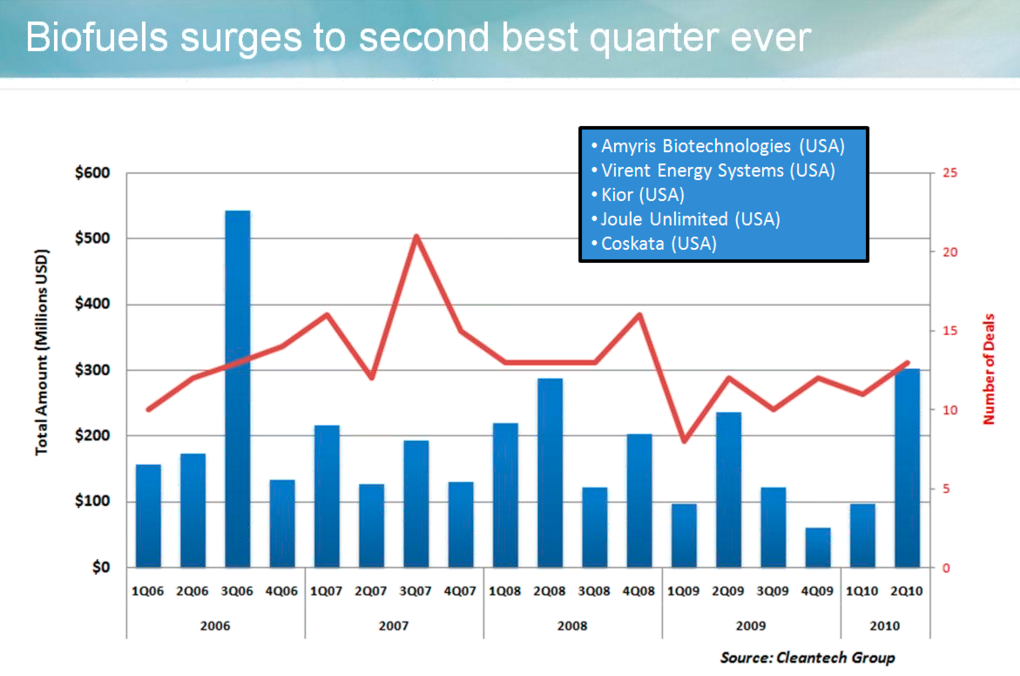 Spurred by the recession, investors are spending money on companies that can save money. Energy efficiency boasted 31 rounds of funding, trumping solar’s 26 and biofuels’ 13 deals. 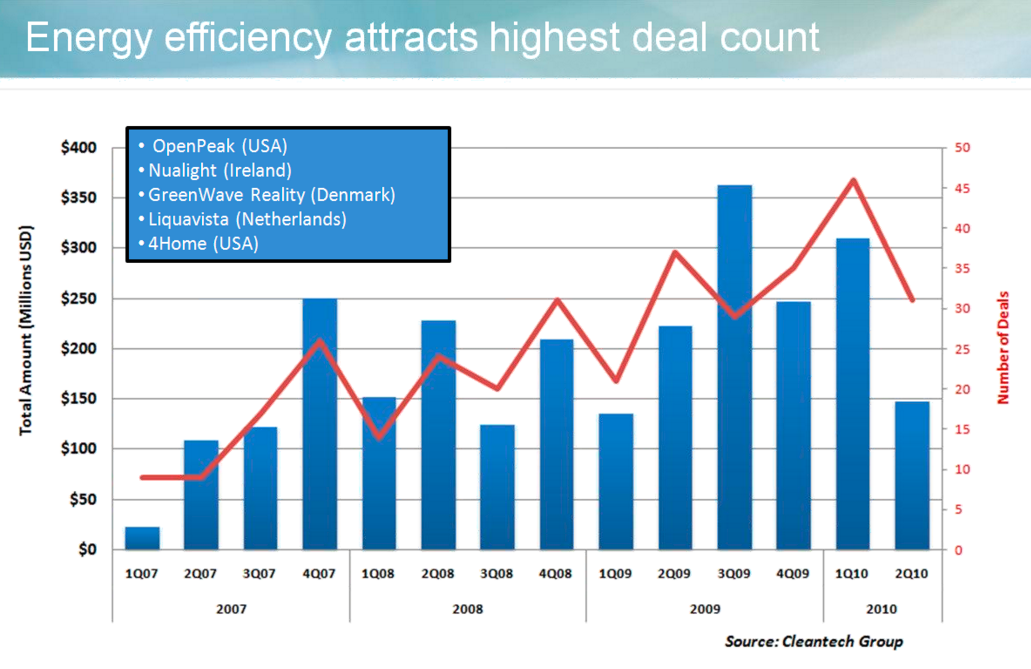 Smart grid investments in particular experienced their highest quarter ever. 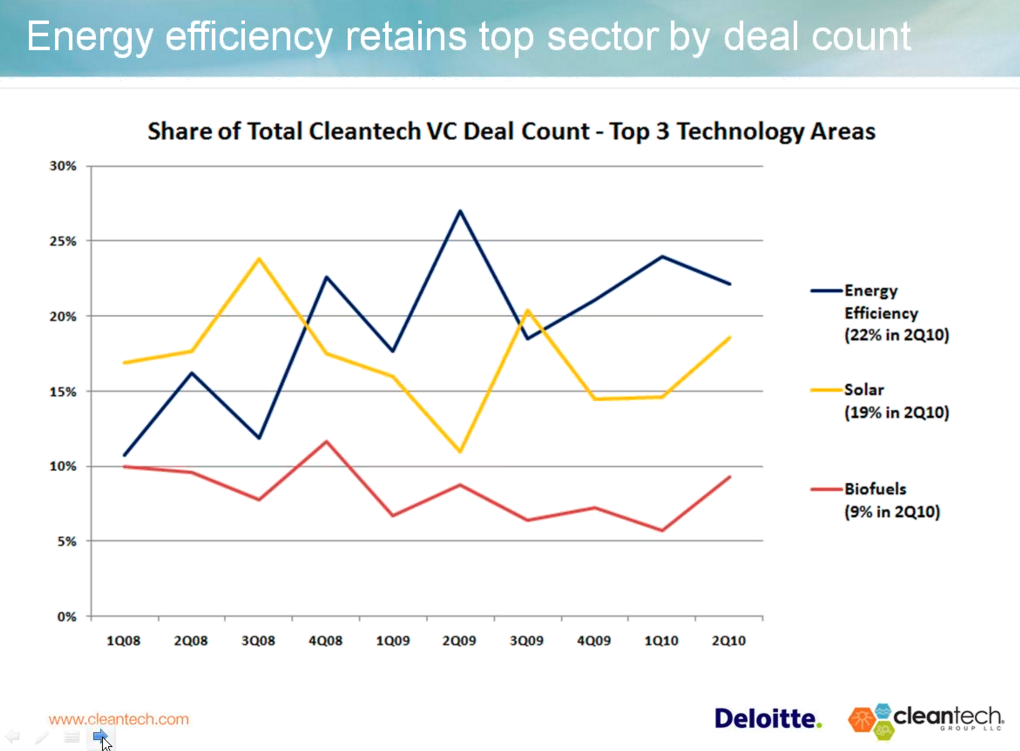