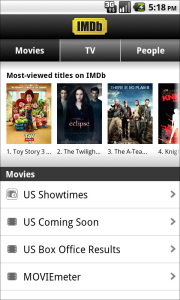 Amazon.com, or rather its Internet Movie Database (IMDb) subsidiary, is launching an Android app, enabling users to get movies information, trailers and showtimes from their Android devices and shop for DVDs and Blu-ray discs.

IMDb’s new “Like” and “Share” buttons make it easier for users to indicate their favorite movies, TV shows and celebrities and then publish their preferences on Facebook and Twitter – the company refers to this as its ‘IMDb Everywhere’ initiative. IMDb promises deeper integrations in the near future.

IMDb already has boasts apps for Apple’s iPad, iPhone and iPod touch, and says they are enjoyed by “millions of users worldwide”.