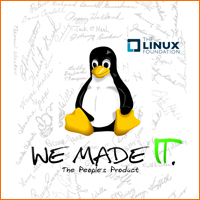 The Linux Foundation ran a t-shirt design contest back in March to kick off the grand opening of the new Linux.com store. More than 100 designs were submitted, and of these six were selected as finalists. Almost eight thousand votes were tallied, and the community-selected winner, with 57% of the votes, is Mr. Said Hassan from the Gaza Strip, who designed “The People’s Product.” Shirts with this winning design are being produced now, and will be available for purchase at the Linux.com store soon-ish.

“This design represents that the Linux system is the collective work of people and it was done so that others can enjoy a reliable, suitable operating system away from a monopoly. So, it’s like a celebration of our efforts: Linux is our product.”

Hassan gets a free trip to LinuxCon, taking place in Boston, MA in August. Way to go, Mr. Hassan!

Be sure to take a look at all of the contest finalists to get a feel for what the community came up with.

Here’s the full press release, for your edification:

Nearly 8,000 votes determine community’s favorite Linux-themed design, to be displayed on T-shirts at LinuxCon and in Linux.com Store

SAN FRANCISCO, June 23, 2010 – The Linux Foundation, the nonprofit organization dedicated to accelerating the growth of Linux, today announced the winning design in its Linux.com Store T-shirt Design Contest, “The People’s Product.” The design won by a large margin with 57 percent (4,501) of all votes cast, with the other five finalists sharing 43 percent of the vote among them.

The winning design was created by Mr. Said Hassan who says it “represents the collective work of the people. It’s a celebration of our efforts: Linux is our product.” Mr. Hassan rallied bloggers and local television stations around his design, garnering a number of articles and television interviews about his submission. He is a marketing consultant at SADAF Information Technology in Gaza in Palestine.

As the designer, Mr. Hassan is receiving travel expenses and a free pass to LinuxCon in Boston (http://events.linuxfoundation.org/events/linuxcon) this August where “The People’s Product” design will be displayed on Linux.com Store merchandise and available for purchase. The design is expected to be available on T-shirts in the Linux.com Store this summer.

The contest was launched with the opening of the Linux.com Store, which is an online marketplace where people can purchase items from an exclusive line of original T-shirts, hats, mugs and other items that reflect “geek culture.” Six finalists were chosen from more than 100 design entries. Nearly 8,000 votes were cast during the month of May as designers competed for the grand prize and encouraged their personal networks to get out the vote.

“’The People’s Product’ design is an important addition to the Linux.com Store merchandise selection and will help generate revenue for activities that advance the Linux operating system,” said Amanda McPherson at The Linux Foundation. “We also hope that the Linux.com Store T-shirt Design Contest will bring attention to Mr. Hassan and others like him who support and contribute to Linux in a variety of important ways.”

All revenue generated from the Linux.com Store goes directly towards Linux Foundation activities, events and strategic initiatives. The Linux Foundation uses funds from a variety of revenue streams to support the work of Linux creator Linus Torvalds and to sustain important services such as technical events; travel grants for open source community members; a vendor-neutral forum for projects such as MeeGo; and free training resources direct from the kernel community; among others.

* More details on the contest: http://www.linux.com/news/featured-blogs/185-jennifer-cloer/301840-linuxcom-t-shirt-design-contest-finalists-announced-