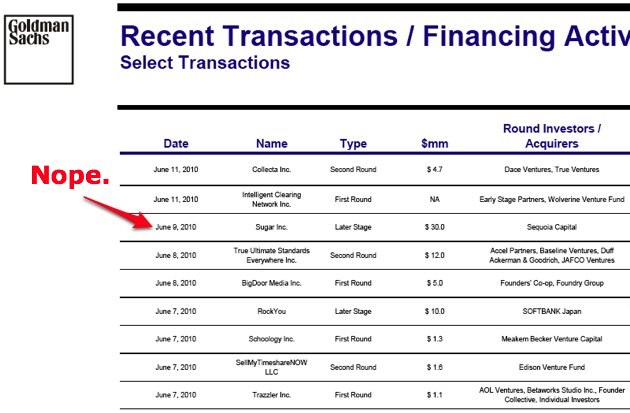 Women’s network Sugar Inc. raised a whopping new $30 million round of financing from Sequoia Capital on June 9, says Goldman Sachs in their quarterly Internet/Digital Media report. That report is based on data they obtained from Dow Jones VentureSource. That has caused a flurry of attention around the fast growing company.

But there’s just one problem – it didn’t happen says an anonymous source close to the company. Sugar has raised a total of $31 million to date, but their last funding round was a year ago. The company is profitable and has no plans to raise more money, says our source.

“This is bizarre” says CFO Sean Macnew. “I wish everyone would stop calling us.”

So where did Dow Jones and Goldman Sachs get their original data? And why didn’t they just check CrunchBase, which has the most up to date information on startups on the planet?

Up next – confirmation that TechCrunch has not been acquired by Yahoo.