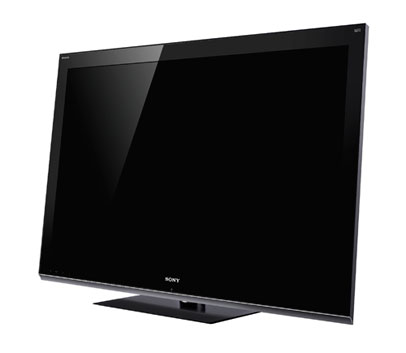 The buzzword is 3D. Everywhere you look in the videophile forums, they’re talking about 3D. Its future is still a little hazy; glasses, no glasses, polarized, anaglyph.. no one really knows. Today, Sony has made its bets and showed a glimpse into that future by releasing its new lineup of 3D displays.

Sony has decided, for the time being, to stay with active shutter glasses that will work with their proprietary high frame rate screens, offering full HD 3D images. Most of the TVs announced will require you to purchase an additional 3D sync transmitter and the 3D glasses, $50 and $150 each respectively. However, the granddaddy television, the Bravia XBR-LX900 series will include both the sync transmitter and two pairs of the active shutter glasses. Those top-of-the-line displays come in either the 60-inch flavor for $5000 or 52-inch for $4000, and both have onboard 802.11n to connect to your network. 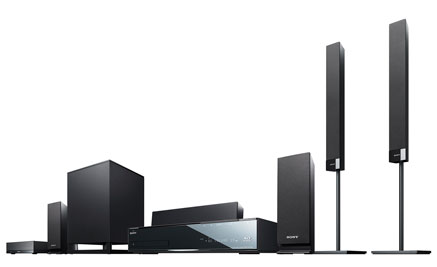 Finally, Sony has announced additions to its Blu-ray and home theater systems that handle 3D. The new 3D Blu-ray player is the BDP-S770 going for $300, and if you happened to have purchased either the BDP-S470 or the S570 in the past, then you can upgrade to the new firmware that supports 3D for free off Sony’s website. Available in July for $800 is the new BDV-HZ970W Blu-ray home theater system.

The coolest part of the announcement is for those with iPhones and soon for those with Android. With an app called BD remote, you can control the players right from in the app. So, if the remote is stuck in a seat cushion, don’t worry about looking for it. Sounds like the Harmony app has a competitor.

“3D is revolutionizing the entertainment industry and only Sony is involved in every stage of the ecosystem,” said Chris Fawcett, vice president of Sony’s television business.  “Leveraging deep 3D expertise from the company’s theatrical and professional groups, Sony products are optimized to offer the best possible 3D home entertainment experience.”

Consumers who purchase and register one of the new 3D BRAVIA models will receive a copy of Sony Pictures Home Entertainment’s Blu-ray 3D™ title Cloudy With a Chance of Meatballs as well as Blu-ray 3D title Deep Sea.  The sets will also include a PlayStation® Network voucher enabling 3D BRAVIA purchasers to download stereoscopic 3D gaming experiences on the PlayStation3 (PS3™) System (sold separately).  The titles include PAIN (partial game) and MotorStorm®: Pacific Rift (demo) and full game downloads of WipEout® HD and Super StarDust™ HD.

Sony’s Intelligent Dynamic LED backlighting improves contrast and dynamic range by local dimming that controls the LED backlight level by area so that detail is maintained in the dark areas, while other areas are driven near peak brightness. The models also include an RS-232c I/0 terminal for custom installation applications.

Sony’s BDV-E570 and BDV-E770W Blu-ray theater systems can now also be upgraded to Blu-ray 3D with the free firmware update.  The update also adds DLNA compatibility to the units.

Unique to all Sony Blu-ray Disc players, users with an iPhone® or iPod® touch device can control the players using a free app called “BD Remote” which can be downloaded from the Apple App store. The app, will also be available soon for Android™ devices, allows the device to function as a remote control that includes the ability to access a Blu-ray Disc’s details such as jacket artwork, actor, and production information as well as search for additional video clips online.

Additionally, Sony will add 3D capability to the previously announced STR-DH810 and STR-DH710 AV receivers through a firmware update later this month.

Sony’s 3D advertising will start airing this week on national TV networks, accompanied by cinema, radio, print and digital ads throughout the year. Owing to the importance of clear consumer education on 3D, Sony will also spread the word about the new BRAVIA 3D TV’s through dedicated training events, displays at authorized Sony retailers, social networks, on SonyStyle.com, through Sony Style stores, and via email, direct mail, and free standing inserts.

The campaign was developed with support of Sony Electronics’ advertising agency 180 Los Angeles.

Specifications and images for all 3D products can be found atwww.sony.com/news.

To learn about the 3D world created by Sony, please visitwww.sony.net/united/3D.