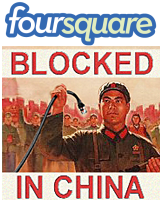 Looks like Foursquare is experiencing the questionable honor of getting the attention of the Chinese government. Authorities appear to have blocked the service, at least in mainland China, according to many a tweet from Chinese location sharers.

While this obviously can’t easily be confirmed, it appears as though the block is a result of Foursquare users checking in to another kind of square: Tian’anmen Square, the infamous plaza in China’s capital of Beijing (Peking).

The Chinese government is likely keeping a tight lock on which Internet services it allows its citizens to use today because of the sensitivity of the date.

Background: the protests of 1989 at Tian’anmen Square, which resulted in the massacre of Chinese protesters, occurred on the night of June 3 and the early morning of June 4.

It remains to be seen if Foursquare will remain blocked for the foreseeable future or if this is just a temporary ban.

(Thanks to CL for the heads up)