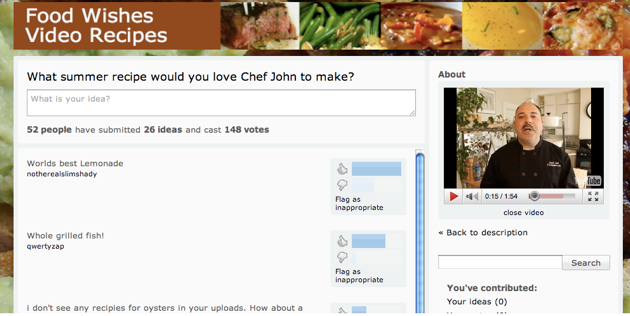 YouTube has always been known for its, shall we say, vocal community. But until now, the only way users had to respond to each other was through the site’s infamous comments, or via video responses — there hasn’t been a particularly good way for YouTube video uploaders to ask their subscribers for opinions. Today, YouTube is launching a new feature that allows channel owners to poll their audience in a more structured manner: it has embedded a customized version of Google moderator, a tool that launched back in fall 2008. The tool allows your subscribers to vote responses up and down, and has been tweaked to allow for both text and video responses (it is also embeddable).

Moderator has previously been integrated for a handful of YouTube events on CitizenTube, including interviews with President Obama and Canadian Prime Minister Stephen Harper; now it’s open to anyone. The feature is pretty straightforward: you enter your question/topic, decide whether you want to allow both text and video responses, and decide how long the poll will run.

This is a perfect feature for YouTube. Many of the site’s millions of users do actually have something interesting to say, but their voices can be lost among the myriad spammy (or just plain stupid) comments left by other users. This gives channel owners an easy way to engage with their audience, without having to sift through the cruft to find the good responses.

Here’s a video showing off how the feature could be used: