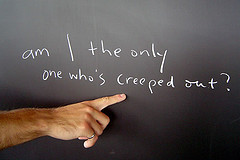 Facebook is under a lot of heat right now for how it shares our personal information. So much so that it is trying to simplify its privacy controls to so that nobody gets surprised when that embarrassing drunk photo you thought you were sharing only with a close set of friends finds its way all over the Web. (Hint: don’t put up drunk photos of yourself on Facebook). But this problem is only going to get worse.

Right now, what people share on Facebook is usually pretty tame: a status update, photo, a link, a video, an action in an app. The ones with the greatest potential to creep people out are the geo-specific ones, which probably explains why Facebook is taking its sweet time to roll out its own geo features like geo-tagged updates and photos. If you think the current uproar over Facebook privacy is bad, wait until Facebook embraces location-based apps in a big way.

This is not just a Facebook problem. It is an issue every major Web service is starting to deal with from Google to Twitter to Foursquare. They all want us to overshare and make it almost too easy for us to do so. The more we share with them about where we go and what we like to do, the more they can show us what other people who we care about are doing nearby or have done in the past. That basic premise is what is so compelling about geo apps. I can check in at a restaurant in the West Village on Foursquare and see that Fred Wilson ate there once and loved the lamb bolognese. That is a very powerful recommendation because I see that right before I look at the menu when I’m hungry and trying to decide what to eat.

When it comes to geo-privacy there are two extremes. Foursquare makes you explicitly check into each place where you want to share your location. That is good for privacy—you only have yourself to blame if you broadcast your location from the strip club—but it makes using the application a bit of a chore. You have to remember to pull out your phone every time you enter a new place and look like a dork while you are checking in. It is also rude when you are at a bar or restaurant with friends and everyone (all the guys, usually) are looking down at their cell phones, but I digress.

On the other end of the spectrum is Google Latitude, which constantly broadcasts your location everywhere you go, but only to people you allow to see it and only at the level of detail you are comfortable with (by city or general neighborhood, for instance). Latitude is a set it and forget it model. This makes you look like less of a dork, but the problem is that you do forget it and you end up either broadcasting your location when you would rather not or, worse, you never have any reason to interact with the application.

Somewhere in between the concept of the explicit check-in and constant geo-tracking is the notion of geo-fences. The idea is that you would basically draw fences around neighborhoods or other locations from where you want to broadcast where you are and places where you don’t. So maybe anytime you travel a certain distance from your home or office, the geo-sharing could begin. This concept is easier said than done, but startups like SimpleGeo are working on making it possible.

Drawing geo-fences is still a lot of work. What would be more helpful, perhaps, would be the ability to tell an application to broadcast your location anytime you are in a public space—a restaurant, a park, a bar, a conference. It would then tell you via a notification when it detects that you are in such a place before it shares out the location. But getting constantly pinged as you walk down the street could get annoying as well. Maybe it would know to ask only a few times a day or when it detects your friends or lots of other people nearby.

As apps and mobile devices become more geo-aware, a balance will need to be struck between the over-sharing creepiness of constant location broadcasting in the background and the annoyance of the constant check-in chore. On Tuesday, at our Disrupt conference, Facebook’s VP of Product Chris Cox described a future where phones are “contextually aware” so that they can “check into flights, find deals at grocery stores,” and do other things for us at that right place, at the right time. “These things take a bunch of clicks now—it’s all wasting time,” he said. “The phone should know what we want.”

Foursquare CEO Dennis Crowley and Google VP of engineering Vic Gundotra were also on that panel. Crowley built Foursquare specifically around the check-in and the idea of getting rewarded for exploring the real world. Gundotra later told us:

Intuitively, the idea of our devices working for us automatically in the background is much more appealing. But you have to ask yourself: Do you want ease of use or do you want control? Somehow these companies are going to have to give us both.