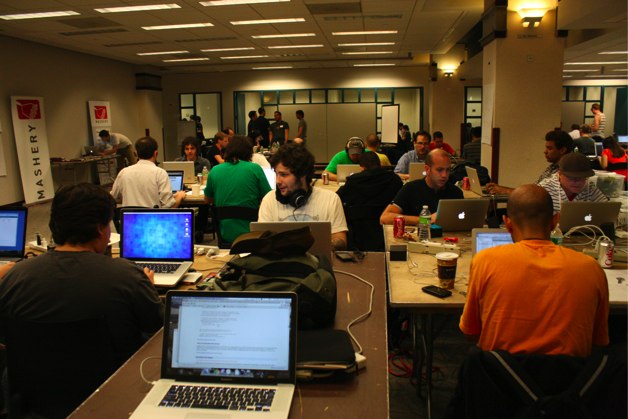 It’s on. The Disrupt Hackathon is fully underway, over 300 hackers are battling through the night to create the very best app, gizmo, robot (or whatever these crazy kids can come up with) within 24 hours. Thanks to the sponsorship of Facebook, Media Temple and Air BnB, the hackers will have access to a pile of Aero beds and all the essential food groups: pizza and caffeine (boxes upon boxes of Red Bull).

The Hackathon will have experts on hand to help participants with the APIs of Facebook, Yahoo!, SimpleGeo, Etsy, Mashery, MeetUp and Google. For those who want to get their hands dirty, there’s a scrapyard station in the back, complete with a Hungry, Hungry Hippo set, the circuit board for a crosswalk sign and a Winnie The Pooh in a wizard outfit. (A gallery of the scrapyard: here) 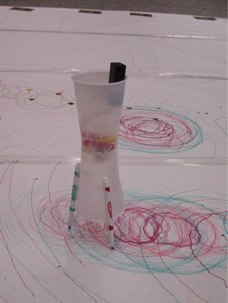 There was also this thing: a plastic cup, marker, and motor contraption that swirled around, drawing circles on a large white piece of paper. In almost any other context, this would be weird. At Hackathon, this endearing thingamabob was perfectly at home.

Early in the session, there was a constant stream of chatter and activity, as teams formed and discussed their projects. The majority of the groups held court in the main hallway while other hackers sought solitary confinement in one of the many conference rooms.
This is a true battle of wits, endurance and speed.

The hackers have until 10 am Sunday to complete their projects, 90-second demos will commence at 11 am and by 2pm, one winner will be left standing. Every team that makes it through the Hackathon will get a free pass to Disrupt, but only the winning team will bask in the glory of presenting their creation on stage this Wednesday (alongside Startup Battlefield companies). 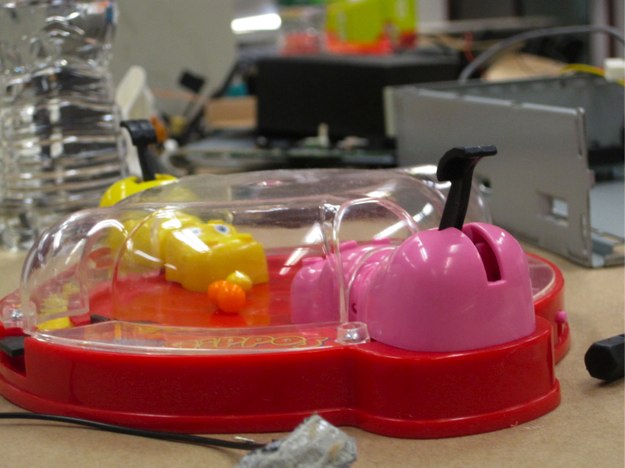