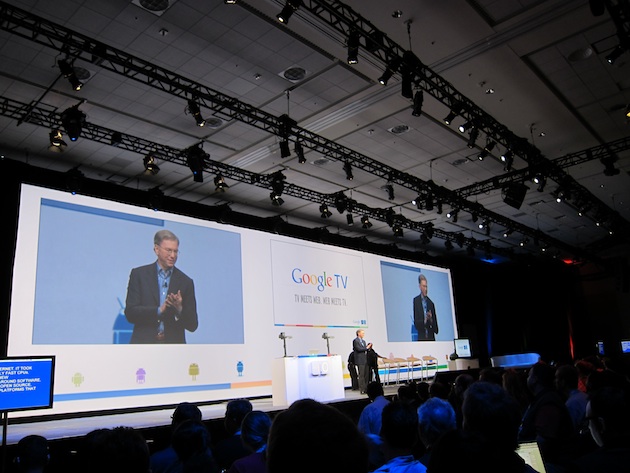 “We’ve been waiting a long time for today,” says Google CEO Eric Schmidt, who is presiding over a power panel of CEOs helping to make Google TV possible. The panel, at Google I/O, includes the CEOs of Sony, Best Buy, Echostar, Adobe, Logitech, and, of course, Google. He needs all of them, as well as developers, to make his new Google TV a hit.

Google TV will be built into a new Sony TV coming out this fall in time for the holiday shopping season, as well a Logitech TV companion box which can be hooked up to existing TVs with an HDMI port. It is Google’s attempt to bring together the 50-year-old TV-watching experience with the Web. It does that in a variety of ways,from a universal search box which searches both TV and the Web to opening up the TV as an application platform for developers and media companies to enhance their video offerings. Its ambition is to bring the Web into the TV and have the same impact on TV as Android and other smartphones are having on mobile phones.

Brian Dunn, the CEO of Best Buy, calls it “an entirely new category: the smart TV. This is the first seamless experience that is able to pull up the things you care about in realtime. I think there will be an enormous consumer appetite to do this.” Schmidt needs Best Buy and its 180,000 “blue shirts” to sell this idea of a Web TV—which has been tried in the past and flopped—to consumers. And Schmidt knows this. He made a point of saying that people have to see this and have it demonstrated to them before they will buy. Best Buy is his surrogate Apple Stores, if you will.

Sony CEO Howard Stringer, who is “fairly giddy with excitement” about introducing a new kind of TV to the market, calls it “active television.” The Google TV experience as demoed today, includes a universal search box which scours both TV and the Web and delivers video from either source in the same user interface. That will be key to getting adoption.

Finally, there is the issue of Flash. Schmidt gave Adobe CEO Shantanu Narayen a big bear hug, positioning Google as Flash’s friend (in contrast to that other Silicon Valley company which hates it and has been beating up Adobe lately). Schmidt threw Narayen a softball question, “Why are we fighting for Flash.” Narayen’s answer: “It is really about engaging content on the Web and getting it to any device. This is really about creating family harmony.” That’s right, “family harmony.” Way to drop the ball.

What he should have said is that Google Tv renders Web video in a browser on your TV and at that size the best way to get a clear picture right now is through Flash. But he didn’t say that. 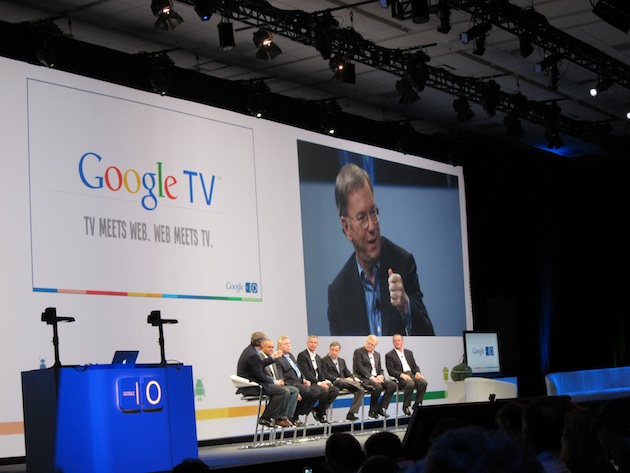