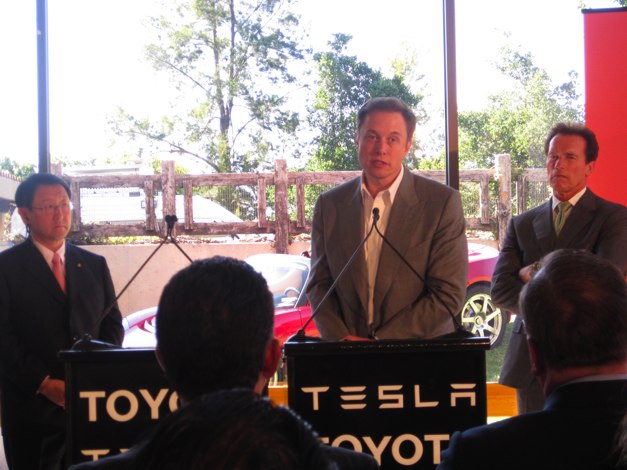 Toyota and Tesla announced a new partnership at Tesla’s headquarters in Palo Alto today, the auto makers will collaborate on technology, the development of new electric vehicles and Toyota will purchase $50 million of Tesla’s common stock (to be completed after Tesla’s pending IPO). The press conference featured the Governor of California, Arnold Schwarzenegger, Tesla CEO, Elon Musk and TMC President, Akio Toyoda.

Calling it an “explosion” for California (I think he meant this in the positive sense, not the Terminator sense) Schwarzenegger framed it as a victory for California’s environmental agenda and the economy. He predicts it will create 1,000 jobs for the state’s embattled economy.

“Toyota is a company founded on innovation, quality, and commitment to sustainable mobility. It is an honor and a powerful endorsement of our technology that Toyota would choose to invest in and partner with Tesla,” Musk said in a statement. “We look forward to learning and benefiting from Toyota’s legendary engineering manufacturing, and production expertise.” The car companies will collaborate on future EV models, as Tesla move towards more affordable models. Musk told us he hopes to create a car in the $30,000 price range in the next few years (with Toyota’s help)— compare that to the roadster which retails for $100k-plus.

Significantly, Tesla announced that it will takeover the New United Motor Manufacturing Inc (NUMMI) plant in Fremont and expects to produce the Model S EV at that location, starting in 2012. The NUMMI, which was formerly a joint venture of Toyota and GM, was shut down in April, leading to the elimination of 4,700 jobs. The hope is that once production truly ramps up for the Model S, Tesla will produce 20,000 EVs from the plant (Musk predicts it will take roughly 12 months, from the beginning of production, to reach this level). The company is currently adding 50 employees per month to keep pace with the expansion that will likely accelerate in the coming months. Over the next few years, he says it’s reasonable to expect Tesla to grow to 2,000 employees, with roughly half of that working in NUMMI.

Earlier today, Schwarzenegger unexpectedly announced (at a separate Google event in Mountain View ) that Toyota was partnering with Tesla to build electric cars in California, according to reports. The possibly accidental announcement took some thunder out of Tesla’s 5 p.m. PST press conference.

For Toyota, it’s a chance to curry favor in the California and larger US market, for Tesla, the car maker gets Toyota’s technology & resources to help it transition from a highly niche player to a more robust force in the domestic auto market. Succinctly: Tesla wants to be more like Toyota, and Toyota wants to be more like Tesla. Musk says the partnership was borne out of a meeting with Toyoda roughly six weeks ago. Musk offered Toyoda a test drive in a Tesla and Toyoda eagerly took him up on his offer—Musk was impressed by the executive’s bold driving skills (“he drove it like a real sports car”) and Toyoda was impressed by the car.

Of course, this is not Tesla’s first partnership with a big automaker. Last year, the company signed a deal with Daimler that gave Daimler a 10% stake and technology in exchange for roughly $50 million, according to reports. Musk said Daimler has been supportive of the new deal and had previously acknowledged that Tesla could use another large partner.

Tesla hasn’t had a lot of trouble attracting capital, with investors like Google’s Sergey Brin, Larry Page, Capricorn Management, Compass Technology, JPMorgan— it’s a really long list. Even the US Deparment of Energy threw down a $465 million low-interest loan for Tesla last year. Attracting money is one thing, the real struggle for Tesla has been building on that base. The company has recorded net losses for virtually every previous quarter—investors should expect further losses until Tesla really ramps up production and deliveries of its more affordable Model S sedan.