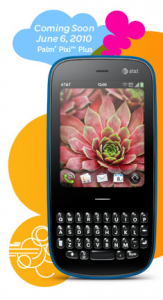 When AT&T announced the availability of the Pre Plus last week, something was missing: its little sister, the Pixi Plus. Gasp! Panic tore across the nation (911 calls were made and subsequently ignored.) Had AT&T abandoned the Pixi Plus? Had a grand wizard, pissed off because his iPhone won’t stop dropping calls, warped them into another dimension? What was going on?

Turns out, AT&T just plans on launching it a few weeks later.

According to this updated landing page, the Pixi Plus will be launching on June 6th. There’s no official price announced yet — however, initial rumors (which had also positively pinned the launch on June 6th) indicated it’d go for $49.99 after a mail-in rebate and a 2 year contract.