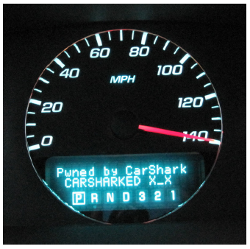 Looks like your car is one dumb “hacker” kid away from careening into a pole, or, more comically, into a big bale of hay. Researchers have demonstrated how to take control of a car’s engine, brakes, and fiddle with the instruments. Is there anything you can do about this?

Yeah, actually. The attacks require physical access to the car, so the only people who would be able to cause you grief would be, I don’t know, your family, your friends, and your mechanic.

Cars aren’t connected to the Internet, so you don’t have to worry about some Russian hacker holding your car’s ignition system hostage after a success phishing attack.

The team of researchers come from the University of California San Diego and the University of Washington. By inserting fake data packets into cars’ electronic control unit using a piece of software called CarShark, they were able to cause all sorts of chaos.

In one attack, the team transformed the instrument panel into a clock that counted down to zero from 60 seconds. In the final seconds the horn honks and as zero is reached the car engine shuts off and the doors are locked.

That’s simultaneously hilarious and terribly dangerous, especially considering that most (all?) new cars have enough on-board electronics to something something. I’ve sat here for a good ten minutes trying finish that thought, but here we are, unfinished.

But again, unless the attacker has physical access to your car and knows how to write code, you probably don’t have anything to worry about.