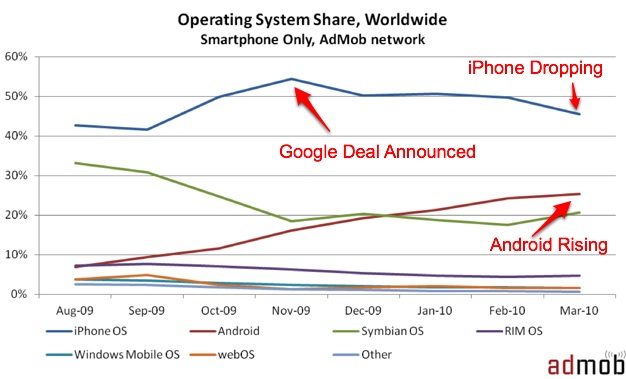 Yesterday, Admob served its 200 billionth mobile ad, only nine months after serving its 100 billionth ad. The mobile ad network is still growing strong, with 160 employees and an annualized revenue run-rate above $100 million.

But ever since Google outbid Apple with its $750 million bid to buy AdMob, the original growth engine for AdMob—iPhone app ads—has been stalling. As you can see by the chart above showing share of worldwide ad impressions across the AdMob network by operating systems, the iPhone peaked as the biggest smartphone source of AdMob ads in November, 2009, right before the Google deal was announced. Since then, it’s been a slow but steady decline from 54 percent to 46 percent in March, 2010. Fortunately for AdMob, Android is picking up the slack, rising from 16 percent of ads served to 25 percent, during the same period. In the U.S., Android is already contributing more ad impressions than the iPhone for AdMob.

Of course, ever since Apple was spurned by AdMob, it’s made it more difficult for AdMob to compete on the iPhone. Apple went on to acquire AdMob rival Quattro Wireless, and plans to introduce its own iAds, which will tie into iTunes in unique ways. Apple may further hobble AdMob by blocking its ability to collect data from the apps which serve its ads.

So you can expect that iPhone percentage to keep on dropping (even if the absolute number of impressions keeps rising, also note that the iPhone figures above do not include the iPod Touch). The question is, can Android keep growing fast enough to make up for it?