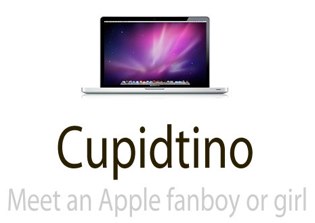 Every once in a while something hits our inbox that is just so…wrong…that we can’t not post about it. Today is one of those times. A new site called Cupidtino is preparing to launch. It’s a dating site for Apple fanboys and fangirls. Yep, you read that right.

Our own resident Apple fanboy MG Siegler, who loves all gadgets as long as they are made by Apple, would be perfect for this. The site’s name is a play on Cupid and Cupertino, California, where Apple is headquartered. From the landing page:

Cupidtino is a beautiful new dating site created for fans of Apple products by fans of Apple products! Why? Diehard Mac & Apple fans often have a lot in common – personalities, creative professions, a similar sense of style and aesthetics, and of course a love for technology. We believe these are enough reasons for two people to meet and fall in love, and so we created the first Mac-inspired dating site to help you find other Machearts around you.

Cupidtino will launch in June 2010 exclusively on Apple platforms – including sweet location-based social apps for the iPhone and iPad.

My thoughts on this: Apple fans can be annoying when they’re on their own. The thought of them breeding and creating little Apple fans, a whole family of hard core hipster Apple lovers, is just not a good thing. On the other hand, making sure that Apple fans only date other Apple fans is a good way of stopping them from spreading their Apple fan genes to the general population, I guess. So maybe this site isn’t all bad.