The Huffington Post is taking on more of the trappings of a social network. Borrowing from Foursquare, today it will start giving out badges to loyal readers who comment like crazy and share HuffPost stories via Facebook and Twitter (the Superuser), collect a lot of fans and followers (the Networker), or flag inappropriate comments (the Moderator). The site also redesigned its user profile page to better highlight each user’s comment stream, and her friends, fans, or followers.

Last summer, the site launched its HuffPost Social News network, allowing readers to log in with their Facebook IDs, and friend, fan, and follow each other on the site. It later added Twitter, Google, and Yahoo as login options. “We want to incorporate the best of social media,” Arianna Huffington tells me. “It is important for the growth of the site so far, and even more important for the future growth.”

The Huffington Post is already fairly huge. Five years after she launched it as a politics blog, it now attracts 23 million readers a month in the U.S. (comScore, March, 2010), which is more than the NYTimes.com (13.3 million). And the site now covers 20 different news categories, including media, entertainment, sports, business, and local city sections for New York, L.A., Chicago, and Denver. An art section is launching next month, and after that a travel section. Politics now represents less than a quarter of the HuffPosts’s traffic.

Of those 23 million visitors, most are casual readers. But 800,000 of them have HuffPost Social News profiles. They are the ones who log in and leave 2.3 million comments a month. In an effort to “maintain a civil environment” and prevent the “trolls from taking over,” says Huffington, in addition to the site’s own paid comment moderators, readers are encouraged to flag inappropriate comments. Now, those who earn the Moderator badge and level up will be able to delete comments as well.

Much of the HuffPost’s growth is coming from readers sharing links on Facebook, Twitter and elsewhere with their social networks. The Networker badge is supposed to reward that kind of behavior. The HuffPost also encourages this behavior with its aggressive promotion of Facebook and Twitter buttons all over the site. Links spread through social sharing “is the fastest growing part of our traffic,” says CEO Eric Hippeau. “Search is still bigger, but referrals from social networks is growing much faster.”

In other words, the more the HuffPost becomes like a social network itself, the more it will rely on Facebook, Twitter, and the rest to drive its growth. 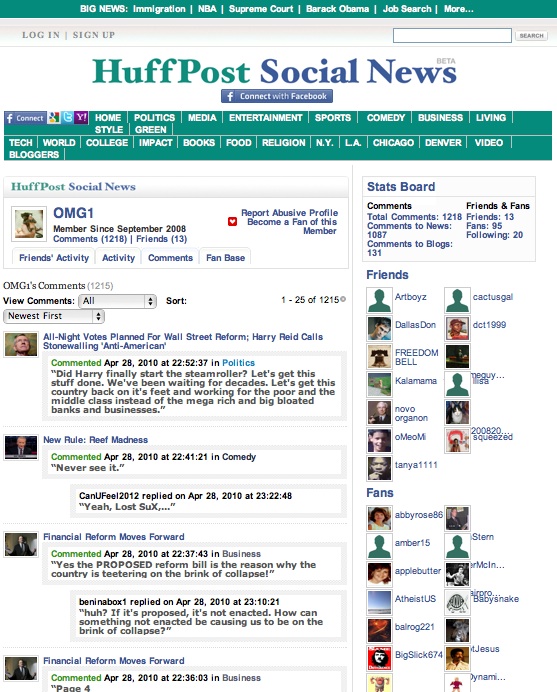