Apple enjoyed strength across the board in the second quarter of 2010, with overall gross margins rising to 41.7% in the quarter, that’s an increase from 39.9% for Q2 2009 (and 40.9% for the prior quarter.) iPhone global sales surged, with astounding growth in Asia, while  Mac sales remained robust in the second quarter. The company is still rapidly adding Mac converts— about  half of the Macs sold in the quarter from Apple stores were to people who had never owned a Mac, according to the conference call.

Abroad, it was all about the iPhone: 474% increase in Asia Pacific, 183% gain in Japan and 133% gain in Europe. Speaking of Asia, overall sales in greater China were impressive, with revenues for the first half of 2010 up 200%— that’s the first time Apple has released that break down. In regards to retail stores, the company is opening 2 stores in Shanghai later this year, and has plans to open 25 stores in China by the end of 2011.

The company’s second quarter report (its best non-holiday quarter ever) easily smashed Wall Street’s expectations with revenues of $13.5 billion and profits of $3.33 a share or $3.07 billion, far beyond expectations for $2.45 a share.

Here’s a quick breakdown of the products: 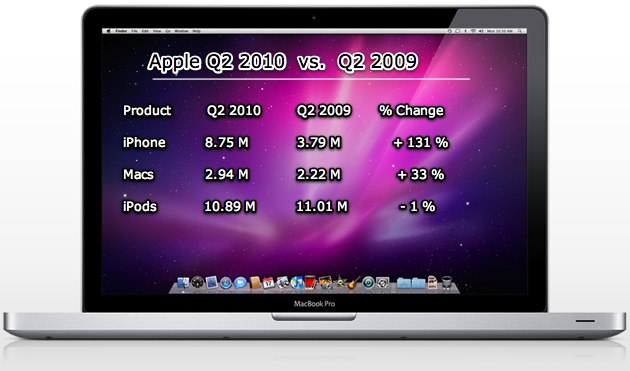 The number of desktops sold rose 40% year over year, while portable sales advanced 28% (but revenues were up only 17%, due to lower prices). The number of iPods sold actually dropped 1%, but revenues jumped 12% (probably on lower NAND flash pricing). The iPhone of course saw the biggest year over year gain, enjoying a 131% jump. Those numbers are roughly on par with NPD’s latest estimates (predicted sales: 10 million iPods, up to 2.9 million Macs), although its call on the  iPhone was too low.