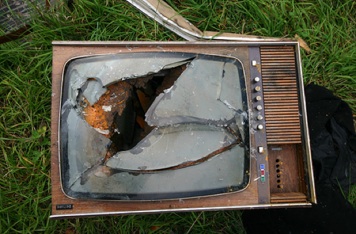 Are you a cord-cutter, or do you want to be? Have you had enough of paying your cable company through the nose for 800 channels, when all you really watch is maybe 20 or 30? With an increasing selection of high-quality TV fare coming online, more people are experimenting with ditching their TVs (or more accurately, their cable and satellite TV subscriptions) for online options such as Hulu, Netflix, broadcaster Websites, or Apple’s iTunes. The numbers are still small, but an estimated 800,000 U.S. households cut the cable cord altogether in the past two years, according to a new report by the Convergence Consulting Group. By the end of next year, that number is forecast to double to 1.6 million. [Corrected: The 800,000 number is cumulative for the past two years, with 600,000 people cutting the cord in 2009]

Cord cutters don’t yet represent a serious threat to the $84 billion cable/satellite/telco TV access industry, which counts an estimated 101 million subscribers. But they are a leading indicator of the shift to TV viewing on the Web. The cord-cutters make up less than 3 percent of all full-episode viewing on the Web. The rest comes from people who are only beginning to watch occasionally online. An estimated 17 percent of the total weekly viewing audience watch at least one or two episodes of a full-length TV show online. Last year, that percentage was 12 percent, and next year it is forecast to grow to 21 percent.

As more and more viewing options become available online, more people will add Web viewing as part of their mix. For instance, in my home we don’t have a TV in the kitchen, but we keep a laptop there. Last night, my wife watched a full episode of Jamie Oliver’s Food Revolutionon Hulu while she was cooking. The online viewership for the Masters on CBSSports doubled this year to 1.3 million people who watched a total of about an hour each of golf online. When any screen can be a TV, people will watch the one that is closest. And the easier it becomes to connect your computer to your flat screen TV, the more the online video sites and services will become just another set of channels.

The free, advertising supported model is still the most popular. Although Apple is making noises about making Apple TV more than just a hobby and doubled the number of TV shows available for download last year, Convergence estimates only 100 million episodes were downloaded in the U.S. last year, up from 90 million in 2008. The associated download revenue was only $200 million.

Meanwhile, Convergence estimates that U.S. online TV advertising by the likes of CBS, Disney/ABC, NBC Universal, News Corp., Time Warner, and Viacom made up 2.5 percent of their estimated $62 billion of traditional TV advertising revenues last year—or an additional $1.56 billion (which is above other estimates putting all online video advertising last year at $1 billion). But you get a sense of the huge revenue gap here, and this is not even counting the extra $34 billion in programming fees the broadcasters and TV networks got from the cable companies last year. No wonder they are in no rush to move their shows to the Web.

What is helping them stave off the cord-cutters is the growth of DVRs, video-on-demand, and HD channels. Convergence estimates that 35 percent of U.S. TV households have a DVR, and 36 percent have HD. By 2012, it forecasts that 50 percent will have DVRs and 58 percent will have HD. And more video-on-demand is bringing a la carte options directly through the set-top box.

But the Web will always be cheaper. It is a question of convenience versus cost. So what are you, a cord-cutter or a couch potato?