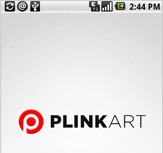 Google has purchased mobile visual search startup Plink for an undisclosed sum, the UK-based company has just announced on its blog and Twitter account (via The Guardian).

Plink is the relatively obscure company behind PlinkArt, a visual recognition app for Android that is able to recognize artworks and paintings simply by analyzing images.

Users can share those photos with friends and also purchase poster versions after clicking through. Plink claims the Android app, which you can find here, was downloaded more than 50,000 times in the month following its initial launch.

Nothing is changing for now, and PlinkArt will continue to work as usual. In future however, we’ll be shifting our development efforts towards Google Goggles, so you’ll see new functionality appearing there.

Back in December 2009, Plink was announced the winner of the second Android Developer Challenge in the Education/Reference category. The victory brought home $100,000 for the developers, and ultimately an acquisition offer.