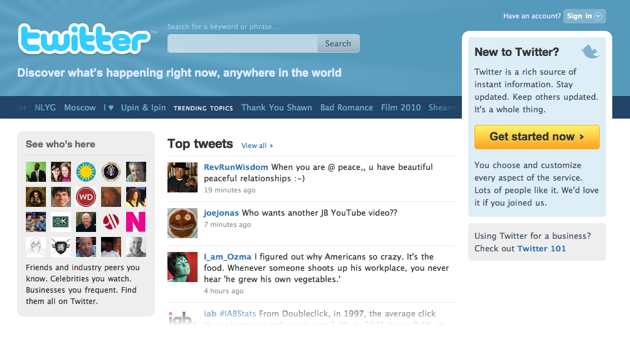 Twitter has just rolled out a new homepage that’s a marked improvement over the current offering, and does a much better job at capturing what the service is all about. The new site features a ‘See who’s here’ section that introduces new Twitter users to some of the celebrities and brands they can find on the service. It also includes a new, constantly updated section for Top Tweets, which are algorithmically selected interesting tweets (Top Tweets also has its own Twitter account here).

Twitter’s homepage is important because it’s typically the first thing people see when they visit Twitter for the first time (once you’ve created an account and signed in, the service automatically directs you to your Twitter feed). Twitter last refreshed its homepage last summer, when it started featuring its search engine front and center (you can see a screenshot of the old page below). This introduced users to the site’s powerful real-time search, but it didn’t do a particularly good job explaining exactly what Twitter was.

I suspect the new page will do a better job enticing new users to explore Twitter, as they’ll be more quickly exposed to interesting tweets (via the Top Tweets section) and will immediately see a smattering of the major brands and celebrities using the service. And they’ll have something to look at other than tweets talking about Justin Bieber.

Note that the page only appears to be showing up sometimes (I just reloaded and no longer see it).

All of our recent changes embrace the notion that Twitter is not just for status updates anymore. It’s a network where information is exchanged and consumed at a rapid clip every second of the day. With so much being shared, we know that there’s something of value for everyone. People who internalize the value of Twitter understand the power of this simple medium. But it hasn’t been easy to make that value transparent or obvious for curious folks coming to Twitter for the first time. 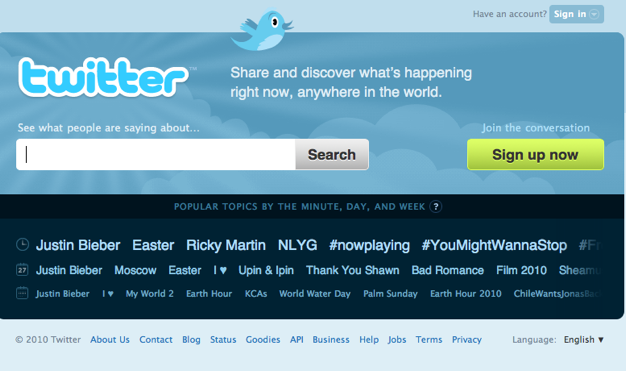