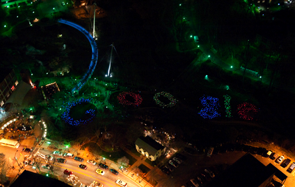 Yesterday, we wrote about the great lengths many cities and towns were taking to catch the attention of Google, in the hope that the search giant would choose their community for its experimental fiber network. The broadband network would be completely free for the chosen city (only the consumers using the services will be charged) and the 1Gb/sec fiber would be roughly 100 times faster than what most Americans get today for Internet speeds. Google’s plan is to reach anywhere from 50,000 to 500,000 people with this experiment. City mayors did everything under the sun to try to appeal to Google, including jumping into freezing lakes and shark tanks and even renaming a city “Google.” The deadline to apply to be one of Google’s guinea pigs ends today and according to a blog post, Google has received more than 600 applications from communities and towns across the U.S.

That’s an impressive number and the application process still isn’t over with four more hours to go until the deadline. Google asked that interested municipalities fill out a Request for Information (RFI) to help determine the best community for the experiment. Google estimated that each form/request from cities would take around 4 hours to complete. Individuals and citizens can also submit letters of support for cities; Google says that over 190,000 letters have been submitted over the past month.

The next step, says Google, is to review all of the city applications and individual letters of support, perform site visits, consult with third-party organizations as well has communicate with local officials in cities of interest. A final city/town is expected to be announced by the end of the year.

As we wrote yesterday, Google plan is designed to compliment the U.S. government’s ten year broadband plan, which among other goals, wants to subsidize broadband connections in rural areas, and bring 1-gigabit connections to every community in the U.S. But there are a number of flaws with the government’s strategy, namely that the plans aren’t ambitious enough. For example, under the new plan, some 85% of homes covered would have no choice when it comes to a provider, possibly locking users into higher prices because of a lack of competition.

So at then end of the day, Google represents a small beacon of hope in that it could provide a concrete example for other communities or broadband providers to follow. And while Google’s initial plan involves a fiber network at a very, very small scale, if all goes well, Google could end up expanding the project nationally.

Google will be posting the final application numbers tonight. We’ll update this post with the final tally.

Photo by Mike Bergen (AidJoy.org for the City of Greenville)