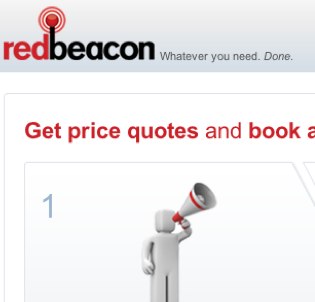 2009 TechCrunch50 winner Redbeacon, a service that pairs consumers with service providers, is releasing a number of new features today, launching a distribution relationship and sharing key data from their beta trial. The 50,000 foot view is, this startup has legs.

Users go to Redbeacon and search for real world service providers (housekeepers, plumbers, handyman, personal trainers, etc.). The service sends you firm quotes from local service providers, based on price and other factors, such as previous reviews and expertise with the specific job you want done. You can book an appointment online, and Redbeacon takes a 10% fee from the service provider.

The service first went live in the San Francisco bay area in October, and now has thousands of local service providers.

Most queries receive firm quotes within an hour, they say, and many get quotes within minutes. 100% of queries have received firm quotes, and “a very high percentage” of users are then booking appointments, says cofounder Ethan Anderson.

But the beta period has given the company much needed feedback, too. Service provider profiles need to have a lot more information, they say, for users to feel comfortable booking with them (and perhaps bringing them into their home). So the company has greatly expanded profiles to give that information. Redbeacon has also created better tools to allow users and providers to communicate before, during and after a job.

User can now upload more information on a job, such as a picture of the problem (a hole in the wall for a handyman, etc.). That leads to more and better quotes, says Anderson. We sat down with him at TechCrunch yesterday to talk about the company: 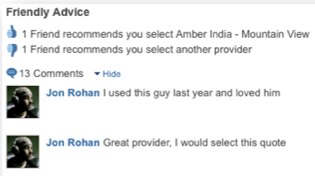 Today Redbeacon is adding a social feature to the product that allows users to ask friends about which quotes they should accept, or to recommend different providers. They’re doing this through Facebook Connect, and allowing users to post their questions directly onto Facebook. This has the added benefit of viral marketing, of course.

Recent studies have shown that people love to ask their friends for advice when it comes to buying goods and services, and the success of services like Aardvark, which allow exactly that, aren’t surprising. 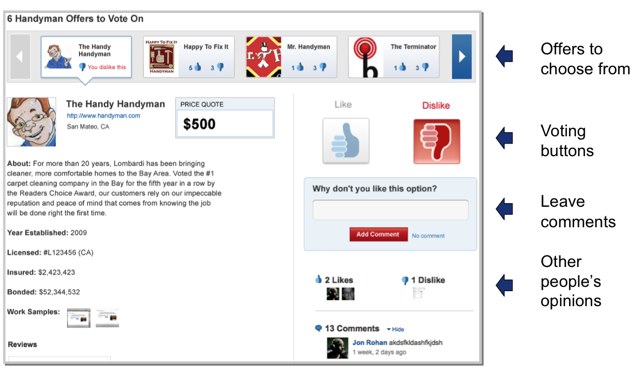 Redbeacon is also adding organization memberships and badges for services providers (BBB, etc.). This gives extra assurance to users that the provider is legitimate.

Redbeacon is also announcing their first third party distribution deal, with Bigtent. These deals push the Redbeacon product directly into third party sites in exchange for a revenue share with the partner. Look for more of these over time, says Anderson.

The Value In Redbeacon: Real Reviews

Redbeacon provides a valuable service that blows away things like the Yellow Pages. But there’s also a hidden gem – the service knows for sure when a transaction occurs, so a review by a user is going to be legitimate. All those problems with fake review on Yelp will be avoided on Redbeacon.

Redbeacon pulls in review from Yelp, Google, etc. as well. But over time the review data they gather will be far more valuable than those services, simply because of verified transactions.

What’s most amazing about Redbeacon is that the startup has held off on raising any outside capital at all until now, despite a feeding frenzy around the company (multiple venture capitalists and angel investors have begged us for introductions over the last few months). I’d imagine that fast will soon be over. Now’s the time to raise a good round of financing and push Redbeacon to multiple markets beyond the bay area.