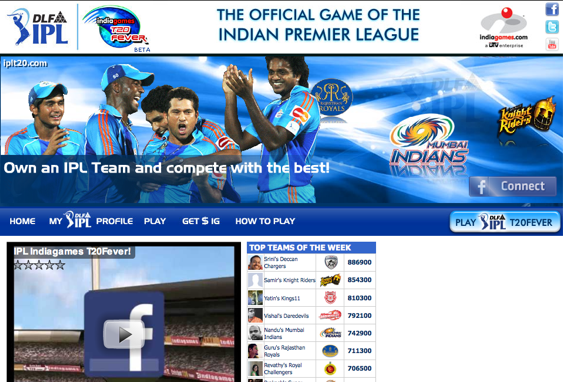 Earlier this year, Google landed a “landmark” deal with Global Cricket Ventures, the licensing partner to the Indian Premier League (IPL), which would give them the so rights to live stream cricket matches from the IPL on YouTube. This is a huge deal because the streaming of the 2010 IPL season (which starts on Friday and lasts for 45 days) is the first time a large-scale global sporting event will be streamed; with the reach expected to be at least a half-a-billion viewers. Now of of India’s largest gaming companies, Indiagames, has bought the official gaming rights to the IPL tournament to deliver games around the Indian cricket tournament.

Indiagames will be launching a series of web and mobile apps throughout the next 45 days. The first app, called IPL Indiagames T20 Fever, is an online game that uses Facebook Connect to allow users to create cricket teams consisting of both Facebook friends and IPL professional cricketers. The game will also include micro-transaction support, allowing users to users to virtually buy IPL players to improve their chances of becoming the IPL Champion.

A second, not yet released online game, called ‘IPL Indiagames 140Cricket’ will be based on a “Cricket Manager” concept and will target Twitter and Facebook users to construct and manage teams. The gaming company will also be rolling out a Facebook game as well. Indiagames partnered with Facebook to develop all three of the games.

While the IPL tournament will be streaming on YouTube, the fact that the official game will have a presence on Facebook will certainly draw Indian cricket fans to the social network. This should help give Facebook an edge over rival social network Orkut in India.