Editor’s note: This guest post is written by Marc Benioff, chairman and CEO of salesforce.com. In it, he responds to critics of his last guest post arguing that enterprise software should be more like Facebook.

Two weeks ago on TechCrunch I posted “The Facebook Imperative,” which posed a simple question, “Why isn’t all enterprise software like Facebook?” It was the next iteration of the question I asked in 1999 that spawned salesforce.com, “Why isn’t all enterprise software like Amazon.com.” If you have read my book, Behind The Cloud, you are well aware how that one question launched a company, and a movement. Its been an exciting decade. But the real excitement is just starting.

Frankly, I’ve been amazed by the huge amount of responses, tweets, and comments (aka “the ruckus across the blogoshere,” as Joe McKendrick calls it). It only strengthens my conviction that we are about to see the greatest revolution in enterprise software, ever. Well, really, the most exciting revolution in computing, ever. It will create more value for users, customers, and vendors by an order of magnitude over what we saw in the last wave. And, it’s really starting to happen right now. It is realtime. It is social. It is mobile. And, it is about time. Literally, it is about productivity.

I’m energized by the excitement I see for a new generation of collaboration software in the enterprise to replace antiquated Microsoft Sharepoint servers and IBM’s Lotus Notes. I’ve enjoyed seeing my observation—that Lotus Notes was conceived before Mark Zuckerberg—reverberate around the web. But, the reality is the Facebook Imperative contained more than a funny line. It hit a nerve. We are all responding—debating—a question that is an imperative because we all need to take software to a new level, and now is the time. Microsoft and IBM have maintained the status quo on enterprise collaboration software too long, and it’s time for a change.

There are an overwhelming number of you who agree that its time to transform the business conversation the same way Facebook has changed the consumer conversation. We are betting salesforce.com’s future on it. Approximately 40% of companies are already deploying or planning to deploy a social computing platform, a number that’s expected to rise, says Irwin Lazar of Nemeretes Research. Not everyone agrees, mostly the vendors that are milking their cash cows. But, make no mistake about it, this generation of social platforms is very different than the last.

Charles Zedlewski emerged from a long blogging hiatus to argue that Facebook is designed for entertainment—not productivity. Well, that’s not surprising given that he works for SAP, one of the companies I have previously referred to as “innovationless”—in my view they remain the Anti-Cloud. Their actions speak for themselves. Still, I’m astounded that more enterprises haven’t figured out how to tap into the real collaborative power of Facebook and Twitter, and the new social models that they have pioneered.

I consider Facebook and Twitter—and the ability to tap into my network of friends and followers—one the most productive ways I can start my day. Using these new Internet phenoms, I’ve tested new ad campaigns and elicited great customer responses, promoted my book to a large audience of people who cared, and with the help of my network, even named new products—all before I sat down for breakfast. I’m not alone; ask Vinnie Mirchandani for a sneak preview of his new book and read how Starbucks, Avon, and Pepsi are using these new social services to increase productivity in their enterprises. Or, look at how Causes, one of Facebook’s most popular apps, is having a fascinating impact on the future of philanthropy.

While my admiration for Facebook is no secret, the fact is that the Facebook Imperative—much like The Amazon Imperative of 1999—is just a metaphor. Like all metaphors, they are terrific catalysts to introduce an idea and orient people. They are rooted in inspiration, but they do not funnel down to the granular details. And, there are details that make this movement entirely new in practice. The power of this new model is to create the next level of productivity, collaboration, and learning in the enterprise. And, I see it happening now in our own company.

For years we’ve been reading about the potential for institutional memory to transform a corporation into a learning organization. But, have we seen it happen beyond very few unique organizations? A true paradigm shift occurs when the barriers of entry are removed for everyone. That is changing fast. With these new social models, there is a way to immediately leverage the knowledge of an organization. People with expertise and relevance are instantly looped in, can participate in the conversation, collaborate, and make contributions more simply than ever before. That will be the catalyst of this new productivity revolution—delivered through these new social enterprise platforms.

We have deployed Salesforce Chatter internally through our own beta program, and we are now using the social models proven by Facebook and Twitter to run our company. Our new social enterprise is built atop our existing business information and applications. It’s not partitioned off from other enterprise applications, but is an integrated part of it—offering a new view of the data that is more productive and easier to use. Through enterprise sharing models, filtering and discovery tools, users have full flexibility over which people and data they follow—allowing them to fully maximize the value of their own feeds and eliminating the risk of “pollutants” some critics fear. 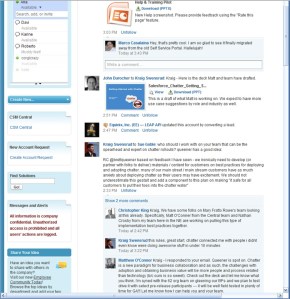 I have learned more about my own company in the last three weeks using Salesforce Chatter than I have in the last three years. It reminds me of the time we went live with http://ideas.salesforce.com. The awareness I have today of what is happening with our employees, our customers, our products, our customer service escalations, and even the deals we are closing is spectacular. Social computing for the enterprise is about seeing what matters to your company, what is happening with your products, and among your people. It’s about the information you need to make decisions finding you. I’m amazed at the potential of this technology. There is just no way I can explain it to you in writing, so here is an actual screen shot that I took off my desktop to give you an idea of the flow (click to enlarge):

It is time to let go of the past and start to create a compelling future for the software industry. I’m energized by the skeptics. It’s familiar. They all eventually convert to what’s important to customers, or become increasingly irrelevant. You don’t have to look any farther than last week when Steve Ballmer spoke to the University of Washington telling them Microsoft was finally “All-In” the cloud. Well, that only took a decade or two. No more software plus services, now they are 100% cloud too. Sure.

I’m living in the post-PC revolution. I’m in a desktopless world that is about feeds and profiles running in all my browsers and mobile devices, and interacting in exciting new ways. It doesn’t matter if I am in the office, at home, or at Starbucks—I am productive wherever I am. The enterprise is not just going to the cloud, it’s now going social, and it’s going mobile. Facebook and Twitter have shown us the way. Like Microsoft, and IBM, not everyone has to get it yet, but eventually they all will. As they say: Shift happens.