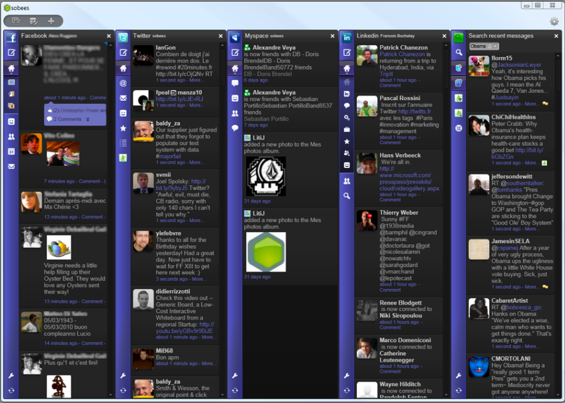 We’ve written about Twitter client Sobees, which is working to create the best social media client on the market, competing with both TweetDeck and Seesmic. Today Sobees is releasing a new version of its Windows native desktop app built in .NET, complete with realtime search, a redesign and more.

The new client includes support for Facebook, Twitter, MySpace, FriendFeed and LinkedIn (which was added late last year). The most significant addition is the availability of realtime search on the client, with the ability to search Twitter, Friendfeed, OneRiot and FacteryLabs from within the application. Sobees integrated elements of its newly launched realtime web dashboard to power search in the client.

Sobees has also added drag and drop technology for columns in order to change the place of a column within the client. Other technical updated include the ability to preview Tweets and maps, translate messages, and see pictures posted on TwitPic from within the Tweet. And Sobees will break out threaded conversations you have with friends.

Sobees is competing in a crowded space where each client continues to innovate and offer users more options for managing their social media accounts and the reealtime web. For example, Seesmic has incorporated Ping.fm, to allows users to update more than 50 different social networks at the same time. And TweetDeck now incorporates YouTube and Flickr within its client. For now, Sobees doesn’t have any mobile clients but we are told that iPhone and Android apps are coming soon.