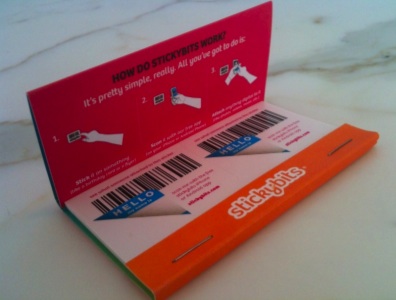 Every place and object in the world has a secret past: who lived there, who passed by, who touched it. The secret lives of objects are filled with such details. If only you could make them talk. But what if you could give any physical object a story simply by sticking a barcode on it and appending a message to that barcode? The message could be a photo, a text message, a video, or a voice note. All anyone would need to unlock the message is a phone with a special barcode scanning app.

Stickybits is that app. Founded by Billy Chasen (the original programmer behind Chartbeat) and Seth Goldstein (chairman and founder of SocialMedia), the startup just closed a $300,000 seed round from Polaris Venture Partners and Mitch Kapor. Officially launching this week at Austin’s SXSW festival, stickybits is a new mobile app for both the iPhone and Android. It lets you scan any barcode and attach a message to that physical object.

The barcode in a greeting card , for instance, could trigger a video message from the sender. One on a box of medical supplies could inventory what is inside. A business card with a code on it could link to a resume or LinkedIn profile. Museums and theme parks could use them for audio tours and maps. Local merchants could use the barcodes to track deliveries or place them in their storefront windows to distribute digital coupons and offers to passersby. The possibilities are endless. 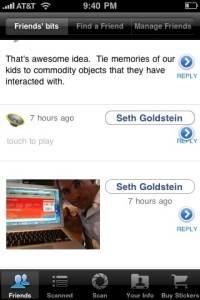 The app is free, but stickybits sells packs of 20 vinyl barcode stickers for $10. You also can download and print your own barcodes for free, or scan an existing one on a physical product like a can of Coke. (Future business model: charge brands to claim their barcodes and place their own messages first).

Each barcode is programmable by the first person who scans it and and leaves a photo, video, audio, or text message. The next time somebody scans that barcode, the previous message will appear on their phone. Anyone can add a new message to the same code, resulting in a stream of messages connected to whatever object or place the barcode is stuck on. Each scan, and related message, is geo-tagged so you can see as an object moves around how its story evolves.

The app lets you follow people and see their object stream, or get notified whenever one of your objects is scanned, moved, or new bits are attached to them. You can toggle between stream and map views. It supports Facebook Connect for login and any scan can be broadcast out to Facebook, Twitter, or Foursquare. With Foursquare, it actually gives you the option to check into the place where you are by scanning the barcode. 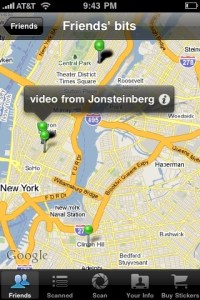 If stickybits sounds like science fiction that may be because they share some attributes with author Bruce Sterling’s concept of “Spimes” (later fleshed out in his book Shaping Things):

The most important thing to know about Spimes is that they are precisely located in space and time. They have histories. They are recorded, tracked, inventoried, and always associated with a story.

Spimes have identities, they are protagonists of a documented process.

They are searchable, like Google. You can think of Spimes as being auto-Googling objects.

Sterling predicted Spimes will eventually be designed into all objects, and contain their histories, raw materials, ingredients, ownership history and other data. Perhaps stickybits are first steps in that direction. 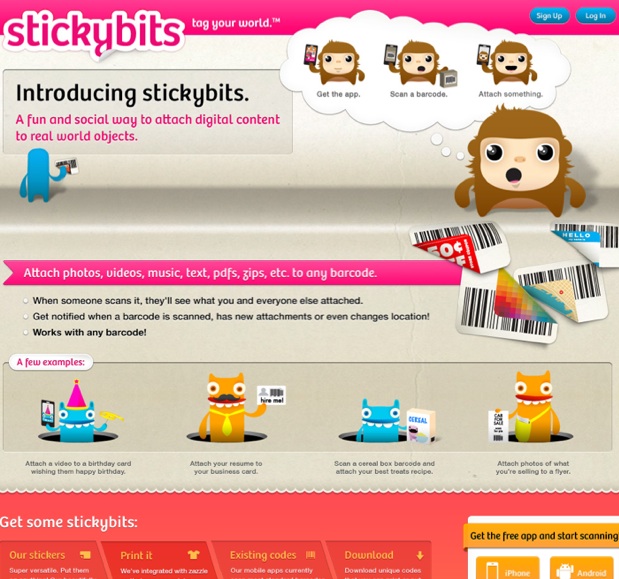