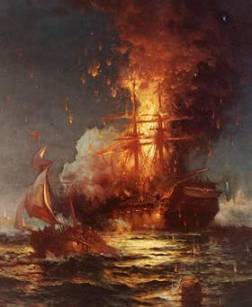 Legend has it that when Cortes landed in Mexico in the 1500s, he ordered his men to burn the ships that had brought them there to remove the possibility of doing anything other than going forward into the unknown. Marc Andreessen has the same advice for old media companies: “Burn the boats.”

Yesterday, Andreessen was in New York City and we met up. We got to talking about how media companies are handling the digital disruption of the Internet when he brought up the Cortes analogy. In particular, he was talking about print media such as newspapers and magazines, and his longstanding recommendation that they should shut down their print editions and embrace the Web wholeheartedly. “You gotta burn the boats,” he told me, “you gotta commit.” His point is that if traditional media companies don’t burn their own boats, somebody else will.

Andreessen once famously put the New York Times on deathwatch for its stubborn insistence on trying to save and prolong its legacy print business. With all the recent excitement in media quarters recently over Apple’s upcoming iPad and other tablet computers, and their potential to create a market for paid digital versions and subscriptions of newspapers and magazines, I wondered if Andreessen still felt the same way. Does he think the iPad will change anything?

Andreessen asked me if TechCrunch is working on an iPad app or planning on putting up a paywall. I gave him a blank stare. He laughed and noted that none of the newer Web publications (he’s an investor in the Business Insider) are either. “”All the new companies are not spending a nanosecond on the iPad or thinking of ways to charge for content. The older companies, that is all they are thinking about.”

But people pay for apps. Wouldn’t he pay for a beautiful touchscreen version of a magazine? Maybe, if it were something genuinely new that blew him away. It would have to be more than an article with video and graphics though. (I agree, otherwise it’s no better than a CD-ROM).

Oh, and he points out, that the iPad will have a “fantastic browser.” No matter how many iPads the Apple sells, the Web will always be the bigger market. “There are 2 billion people on the Web,” he says. “The iPad will be a huge success if it sells 5 million units.”

Despite trying time and again, Andreessen’s observation is that media companies have no aptitude for technology, nor do they really understand what technology companies do. The one thing technology companies do really well is deal with constant disruption. “Microsoft is going through this right now,” he points out, “Ballmer is not complaining about it.” He’s tackling it head on. So did Intel when Andy Grove gutted it to shift from memory chips to microprocessors. So does every technology company CEO. It is ingrained in the industry Andreessen comes from, so it is just obvious to him: “You are cruising along, and then technology changes. You have to adapt.” Media companies need to learn that lesson fast. To the extent that their products are now delivered and consumed as digital bits, they too are becoming technology companies.

Beyond the iPad, he believes that all the talk once again from big media companies about erecting paywalls or somehow charging for news, articles and video online is shortsighted at best. He comes back to the simple fact that the open Web is where the users are. Talking about paywalls and paid apps is like saying, “We know where the market is and we are not going to go there.” Print newspapers and magazines will never get there, he argues, until they burn the boats and shut down their print operations. Yes, there are still a lot of people and money in those boats—billions of dollars in revenue in some cases. “At risk is 80% of revenues and headcount,” Andreessen acknowledges, “but shift happens.” You’d have to be crazy to burn the boats. Crazy like Cortes.