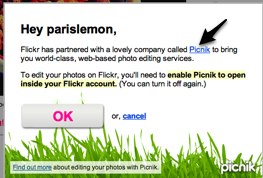 Google has acquired online photo editing site Picnik, according to a blog post made by the photo editing startup today. Google also announced the acquisition on its blog. The entirety of Picnik’s blog post is embedded below.Terms of the deal were not disclosed in either posts.

Picnik is one of the fastest growing photo sites on the web. Picnik is a powerful, cloud-based photo editor that is integrated directly into Flickr, SmugMug and other photo repositories. Interestingly, Picnik is Flickr’s default photo editor. I’m assuming that will discontinue with the acquisition. It would make sense that Google would fold Picnik’s technology into its photo sharing product and Flickr competitor Picasa, which has some basic editing offerings but doesn’t compare to Picnik’s vast editing technologies.

Competing online photo editors include Fotoflexer and Photoshop.com.Picnik offers a base version of its photo editor for free, and subscription model for a more feature-rich offering. When we spoke to the startup’s CEO Jonathan Sposato a year ago, Picnik was cashflow positive, a little more than two years after launch.

Google is on a bit of a shopping spree; the search giant bought iPhone email app reMail, and social search startup Aardvark in a matter of weeks.

When Bitnik, Inc was created, our founders envisioned making great software for real people and giving users the power to edit digital photos in their browser, without having to purchase or download complicated software. While our first office in 2005 only had two desks, today we’ve grown to 20 employees and have become the world’s most fun online photo editor, with millions of visitors every month. As we’ve grown together over the years, we’ve worked hard to build a company of great people creating great software. We think our emphasis on strong partnerships, a fun culture and you, our users, is what has made Picnik so awesome.

And all this leads us to today’s exciting news: we’ve just been acquired by Google! What does this mean for Picnik? It means we can think BIG. Google processes petabytes of data every day, and with their worldwide infrastructure and world-class team, it is truly the best home we could have found. Under the Google roof we’ll reach more people than ever before, impacting more lives and making more photos more awesome.

What does this mean for you Picnikers? Nothing is changing right away, but Picnik now has more potential than ever before. The team that built Picnik from the grass up will continue making advanced and powerful photo-editing easier, more intuitive and more fun, so say tuned to hear about all the cool new stuff we’re working on. We want to thank you all for being great users, pushing us to grow and do big things. So thank you all for your continued support, and Happy Picniking!