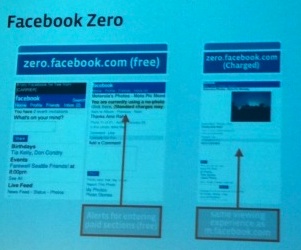 At the Mobile World Congress 2010, Facebook’s Chamath Palihapitiya just finished a 20-minute keynote, outlining the social networking juggernaut’s mobile strategy. We’ll have a video of the full presentation up soon.

There were no major announcements, but Palihapitiya did introduce something interesting that hasn’t been publicly announced yet: Facebook Zero.

When you visit the URL zero.facebook.com using your mobile’s browser, you’ll see a notice that your carrier does not yet support the service – obviously because it was just launched and operators have yet to sign up.

Palihapitiya only touched on it for a couple of seconds, but from what I gathered it’s basically a text-only version of the Facebook service that carriers can offer to their subscribers at no charge. If a user then decides to switch from text-only to multimedia (e.g. view photos from their friends), mobile operators can start charging them for ‘premium’ data service.

This system is apparently called zero-rated pages, and allows operators to use a trimmed down version of a web application as a sort of teaser, driving the adoption of certain mobile services or apps, and more data usage revenue down the line.

Presumably, Facebook will offer Facebook Zero to carriers for free, since it helps them make the social network as ubiquitous on mobile phones as possible.

We have an e-mail in with Facebook PR for more information.

“Zero” is a light-weight version of m.facebook.com that omits data intensive applications like Photos. It will launch in coming weeks and we are discussing it at MWC as an option to make Facebook on the mobile web available to everyone, anywhere and allow operators to encourage more mobile Internet usage.