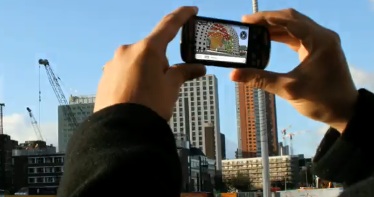 Big day for augmented reality startup Layar today. I’m here at the Mobile Premier Awards ceremony in Barcelona, where the company just announced on stage that they have struck a global distribution deal with a major handset manufacturer.

Layar has opened up a sort of app store or augmented reality experience delivered on top of its platform.

Also, the Dutch startup is announcing that it has crossed the 1 million user mark, and that two European investors have stepped up to inject €2.5 million ($3.4 million) of capital into the venture in a series A investment. The investors are Sunstone Capital and Prime Technology Ventures.

We’ve been covering Layar and its evolving platform since it debuted last summer.

WiFi is fairly spotty here at the venue, unfortunately, so we’ll get into the specifics of the platform play at a later stage. For now, here’s this bit straight from the press release:

The Layar platform allows brands, game developers, publishers and producers to engage with customers through the creation of rich immersive real world experiences. Already 375 layers have been published, with over 1200 layers in development. More than 2000 organizations in 70 countries are benefiting from the unique capabilities of the Layar platform, developing great content.

As of mid March 2010, all Layar producers and publishers will be able to generate a return from their investment in AR. They can offer both free and paid content through the Layar platform. Layar will facilitate global mobile payment processing and distribution in all currencies. Producers can fully focus on content – without having to worry about mass market distribution, developing for multiple mobile platforms, or financial administration.

Layar didn’t specify which global handset manufacturer they have reached an agreement with, but they say it is one of the top 3, and that the deal will enable tens of millions of people to experience Layar AR content on their mobile phones in 2010.