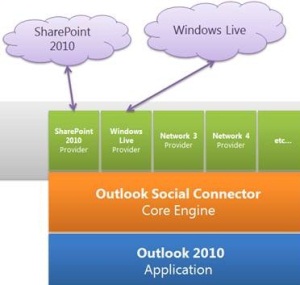 In November 2009, when Microsoft announced the release of the public beta of Microsoft Office 2010, the company also introduced an entirely new add-on for its Outlook product that we haven’t heard a peep about since.

That’s about to change soon.

The product, dubbed Outlook Social Connector, essentially aims to make Outlook more social by integrating streams from Windows Live and third-party networks directly into the widely used communication app and its familiar interface, among other features that will enhance the functionality of Outlook and other Microsoft products like SharePoint.

For more information about how Social Connector, check our previous post and/or watch this video from Channel 9.

Microsoft and its initial launch partner, LinkedIn, didn’t share many details about the product at the time of the initial announcement but stated that it would be made available ‘early 2010′. Since then, it’s been very quiet about the product.

A public beta version of Outlook Social Connector will be available next week, sources now tell us, and we also hear Microsoft will be announcing a number of additional partners that have been brought on board alongside LinkedIn. These partners include social network juggernauts such as Facebook and MySpace, which are of course far less business-oriented than products and services like Outlook and LinkedIn.

While a lot of people will appreciate the ability to see status updates from and interact with friends from multiple social networking services straight from their Outlook application, I have a feeling their managers and their employers’ IT departments will be far less enthusiastic about Social Connector. 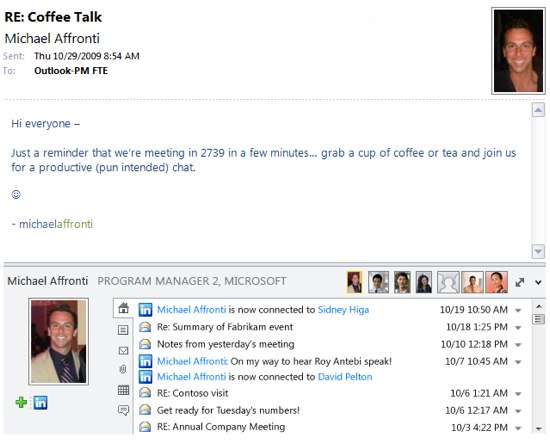