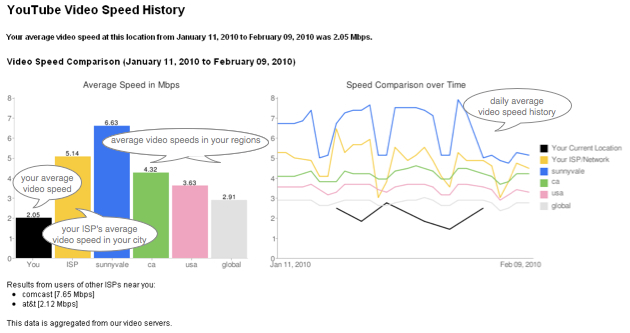 Google has recently been making a lot of waves with regard to Internet speed. Last June, the company posted a blog post detailing its need for speed. And yesterday
it announced plans to deploy a fiber-optic 1Gb/sec network to a limited number of customers to explore what kind of services could be built using that kind of bandwidth (most US ISPs only provide a tiny fraction of that). Today, that obsession with speed is hitting another of the site’s properties: YouTube.

YouTube is launching a new Video Speed Dashboard that allows users to see how their download speed stacks up against other users on their ISP, local users using other ISPs, and the state, national, and global averages. All of the data is measuring according to how quickly YouTube video streams to your browser, averaged over 30 days.

This is an interesting (and somewhat amusing) move by YouTube, because it’s probably going to result in a lot of people calling up their ISPs to ask why their video speeds are so much slower than their neighbors’. Of course, such information has been available through plenty of broadband tests for years, but your average consumer isn’t exposed to it that often. Here, they’ll have more tangible data, and they’ll care when they find out their YouTube is slower than everyone else’s.

Given this new Dashboard and Google’s other moves to drive speed increases on the web, I can’t help but wonder if Google might start showing small popups to users on slow connections, the same way they do to users with old browsers. Imagine a banner that said something like “Hey, your ISP is slow, and there’s a faster one available on your street, want to check it out?” This is going to be fun.