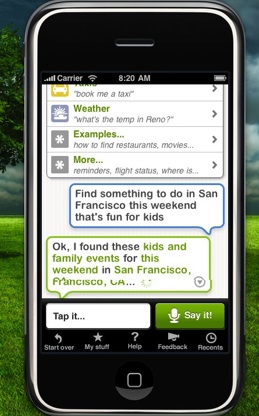 After nearly a year in development and $24 million in venture capital, Siri is finally ready to bring its personal assistant to the iPhone. Siri brings a conversational interface to the iPhone which allows you to ask it to perform tasks for you such as find a French restaurant nearby and book a table, look up movie listings, order a taxi, or look up the phone number and address of a local business.  The app is now live in the App Store (iTunes link; for now it is recommended only for iPhone 3Gs models because it requires more processing power, but a version tuned for older iPhones will be come out by the end of the quarter)

You simply speak into the phone with a request like, “Find something to do in San Francisco this weekend.”  It turns your speech to text and pushes your request out to an appropriate service on the Web such as Eventful or Citysearch, in this case.  It not only attempts to bring you back the appropriate information based on context, time of day, and your location, but with your permission can go ahead and make reservations or buy tickets as well.  (Read our extensive first-look coverage from last year or watch this sneak-peak video)

Siri combines an impressive array of technologies and brings them together on the iPhone.  These include natural language processing and semantic analysis.  The underlying technology was developed at SRI with $200 million worth of Darpa grants. Siri was spun off to commercialize it and bring it to consumers.  It’s last funding round was led by Hong Kong billionaire Li Ka-shing (a fact never disclosed before), who also is an investor in Facebook.

In a way, Siri is the “mother of all mashups.”  The iPhone app is a conversational interface with Siri’s servers on the Web, which tie into  nearly 30 different APIs at launch, with more on the way.  These include OpenTable, TaxiMagic, MovieTikets.com, Rotten Tomatoes, WeatherBug, Yahoo Local, Yahoo Boss, StubHub, Bing, Eventful Freebase, Citysearch, AllMenus.com, Gayot, and Wolfram Alpha.

The app is free, and Siri gets affiliate fees every time you buy something like a concert ticket or make a restaurant reservation through the app.  In addition to helping you do things, it also can be used to set reminders. Simply tell it to remind you by email to make a phone call on Thursday morning, and it can figure it out.  The app licenses its speech-to-text engine from Nuance, another SRI spin-off. Android and Blackberry versions are also in the works. 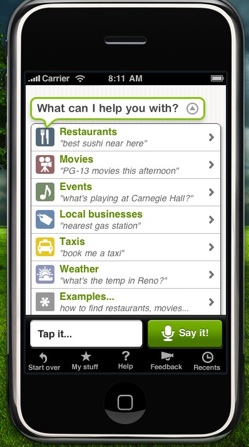