File sharing and syncing service Dropbox is close to expanding its line of mobile products, which includes a mobile phone friendly website and an iPhone app, with custom apps for Android and Blackberry devices.

In an e-mail update sent out to its user base – over four million strong these days – the startup reminds people about the existence of its mobile website but ends the message with a couple of sentences that leave little to one’s imagination:

“Do you own a Blackberry or Android phone? Don’t worry! We’ve got plenty more mobile magic coming soon!”

Furthermore, in the latest post published on Dropbox’ company blog, engineer Will Stockwell notes his resolution for 2010 is “to release some crazy new features for the iPhone app” and to begin poking his head around “some other undisclosed projects.. coughANDROIDAPPcough”. The company seems pretty serious about its plans for servicing Google’s open mobile OS platform, as it’s also looking for an extra Android Developer according to its jobs page.

In case you’re not familiar with the service – unlikely given the fact that the startup has won a Crunchie for Best Internet Application at the most recent awards ceremony – Dropbox enables people to sync files and media across platforms and devices, in order to have them available from any location. Dropbox provides users with 2 GB of space for free (twice the storage Google offers), with add-on plans offering more storage and functionality for a fee.

Dropbox was founded by CEO Drew Houston and CTO Arash Ferdowsi in 2007, and received seed funding from Y Combinator soon after. The company went on to raise $7.2 million from Sequoia Capital, Accel Partners and Amidzad Partners.

(Thanks to Erin Blaskie for the tip and the TwitPic image) 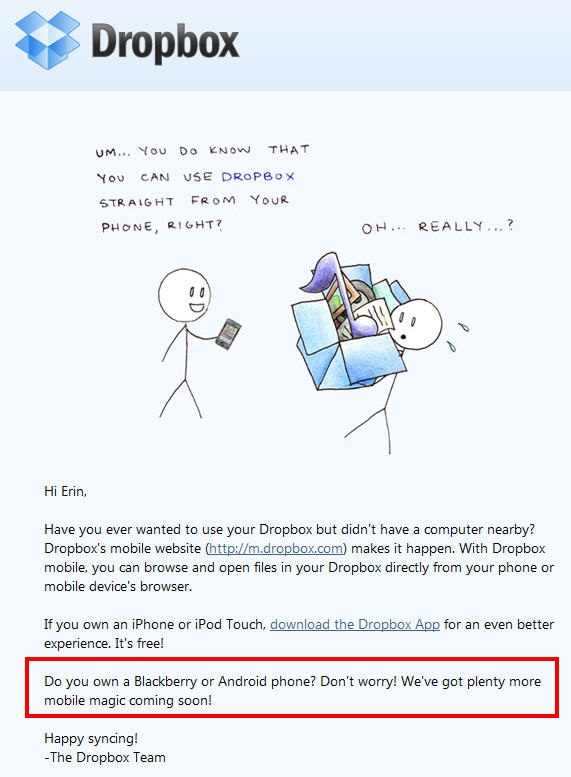