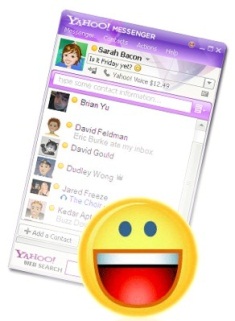 Nice timing, Acacia Research Corporation. The patent acquisition, development and licensing company, which was profiled in depth by BusinessWeek just two days ago, this morning announced that it has been awarded a total of $12.4 million in a patent infringement case against Yahoo.

On May 15th, 2009, a federal court jury decided that Yahoo’s messenger program with IMVironments – which revolves around interactive backgrounds that users can add to IM conversations – infringes US Patent Number 6,205,432, filed by a trio of inventors and published back in 2001.

The patent was described as follows:

An advertisement system and method are provided for inserting into an end user communication message a background reference to an advertisement.

In some embodiments, the background reference causes an advertisement image to be tiled, or watermarked, across an end user screen behind the text of an e-mail message or public posting.

In addition, the District Court’s judgment awarded a post-verdict ongoing royalty rate of 23% for all of Yahoo’s IMVironments sales.

To learn more about Acacia Research Corporation and its business, I suggest you read up on the company by heading to the BusinessWeek profile.

To give you an idea: Acacia essentially buys patents from inventors and then seeks fees from companies that it says infringe on those patents. It’s in the business of suing companies rather than producing products or services; the company is said to have filed at least 337 patent-related lawsuits since its inception in 1992.