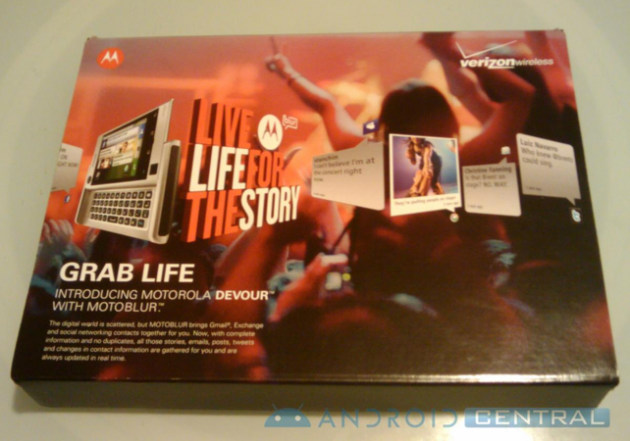 Step-by-step, Motorola’s next Android phone for Verizon, the Devour, is inching itself onto the shelves. First came the rumors, then came the spy shots, and now..

This. Unearthed by the dudes over at AndroidCentral, it was initially reported to be the world’s first look at the Devour retail box – but something just didn’t seem right with that. It was too big (compared to the minimalist, slim packaging of the Droid), and too.. advertise-y.

Its much more likely that what we’re looking at isn’t the retail box, but the box for a pre-release demo unit shipped out to Verizon store managers as a sneak peak. There may very well be a Droid Devour tucked within that cardboard cage, but the box probably won’t look anything like that if you pick one up for yourself.

With demo units being shipped and the handset already sittin’ comfortable in Verizon’s inventory system, we can’t be more than a few weeks from launch.