Since mid 2007, Weebly has offered an intuitive and powerful drag-and-drop website building tool that makes it easy to build rich sites websites with no technical know-how required. Up until now, the company has marketed its product directly to consumers, generating revenue by offering some premium features and services. Today, the startup is bringing its technology to a new market: web hosting customers. The company is announcing that it has been integrated with Endurance International Group, a company that owns a number of hosting providers. Endurance has over 700,000 paid customers across all of its properties, and all of them will get Weebly integration.

Weebly has provided Endurance with a dedicated set of servers that will be running the service. By keeping the Weebly machines on site, Endurance will be able to keep access speeds high to its customers, and can better control reliability and data storage. But while Weebly won’t be directly in control of the servers, they’ll still be pushing regular updates as Weebly proper gets updated. 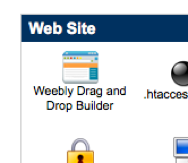 Weebly CEO David Rusenko says he can’t disclose details of the deal, but that Weebly will make money through a revenue sharing agreement. Endurance customers will be offered Weebly’s premium features, with pricing tiers set by Endurance. Customers will pay through their Endurance accounts, and Weebly will take a portion of the proceeds. The tool itself will look identical to Weebly.com, but will be accessed through an option in the hosting provider’s control panel.

This is a win for both Weebly and Endurance users. Anyone who has recently used a web hosting provider knows that the page building options almost always leave a lot to be desired — sure, you may be able to install WordPress using an automated script, but for building a custom website your options are extremely limited. These integrataed tools typically leave you with something that looks like it was designed in 1999. Weebly is a big step up from these outdated tools, allowing users to build custom sites that can include everything from blogs and rich media to Ecommerce.

Rusenko says Weebly is in talks with other hosting providers to launch similar integrations, so it’s likely we’ll be hearing related news in the near future. He also notes that Weebly recently passed 3 million users.