Seesmic is going to announce a new product on Thursday. Earlier today, I received an email invitation to attend a “private event” in New York City on Thursday “at which Seesmic and several of its partners will announce a new application that has the potential change the way consumers and brand marketers experience Twitter.” What is it? The email didn’t say, but Seesmic CEO Loic Le Meur left a clue on Twitter when he broadcasted that he was “taking a look at a cool new app.” The message was sent from “from Seesmic Look.” (He left a clue like this before when he bought Ping.fm).

Twitter identifies not just the person, but also the application from where a message originates. When you click on Seesmic Look it takes you to a landing page for an upcoming product launch on Thursday.

So what exactly is Seesmic Look? Well, we know that it will involve “brand marketers” and thus may be the first time Seesmic brings some form of advertising to its product, which is one of the more popular Twitter clients across the desktop, the Web, a native client for Windows7, and mobile platforms (Android and Blackberry).  But all of these clients so far are aimed at Twitter power users.  Seesmic Look sounds more like a women’s magazine.  Could this be a new, simplified product which tries to appeal to the masses? Bringing Twitter to more mainstream consumers is certainly the type of application which would appeal to brand marketers.

Now maybe I’m reading too much into things, but Loic left another clue to that effect last year when he put up a YouTube video with “30 Predictions for Twitter.”  I’ve embedded it below, but you can just jump to the 1:12 mark where he points out that mainstream users “won’t use the same tools as we do.  The current tools, including ours are really, really aiming at the power users, the very first Twitter users.”  He says that there will be a “dramatic change” in the Twitter tools and apps to make then “much easier to use” and “more accessible to the public.”  He then slips and says, “You will see, I think, at least we will make it.”

Ever since I first saw that video, I’ve been wondering when we’ll see Seesmic’s Twitter app for the masses.  Maybe we’ll finally get a look at it on Thursday. 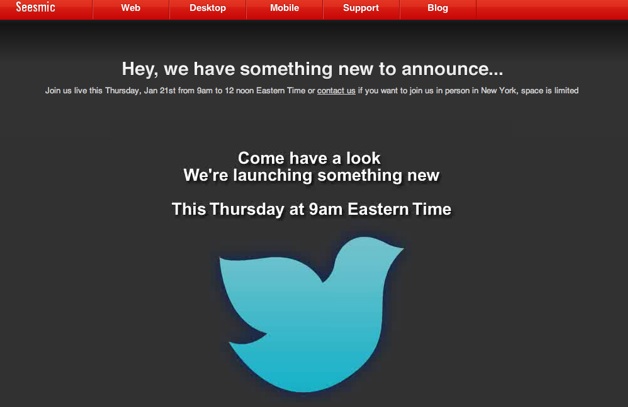