Aol’s answer to Wikipedia is Owl, a new site described as “a living, breathing library where useful knowledge, opinions and images are posted from experts the world over.”

Owl seems more of a testbed for Seed than anything else. Seed, of course, is Aol’s new low-cost content management system for soliciting articles and photographs for its network of existing Websites. Owl will crowdsource freelance work from “experts” who submit articles about movies, books, health, sports, money, parenting, computers, and other topics.

An “expert” is anyone who gets approved through Seed. Contributers get paid a little bit and the articles tend to be more how-to advice such as “How To Survive A Long Flight”, “The Right Way To Pop a Zit,” and “Top 5 Ways To Score Free Food.” It’s all very search-engine friendly.

Actually, Owl is less like Wikipedia than it is like Helium, which also pays for expert articles and has been around for more than three-years. Right now, Owl is rather spare. Most of the articles still seem to be written by Owl/Aol staff instead of contributors. That should change once more people find out about it.

Owl fits neatly into Aol’s plan to create as much content as possible on current topics or evergreen interests so that it can throw more ads against those Web pages. Even if Owl is way late to the game (see About.com, Helium, eHow, wikiHow, HowStuffWorks, Instructables, Expert Village, and so on), AOL operates a big enough network that it can just cross-promote Owl from its own sites. And, as I mentioned, search engines love that type of content.

The only question is whether or not Seed can feed Owl with enough articles to keep it healthy.

Update: An Aol employee reveals, “Owl was developed last year as one site that could publish content from Seed on a wide range of topics. It is not currently being used, however.” That explains why it is so light on articles. Aol is currently using Seed to assign and publish stories across its 80 existing sites. But it is also developing new sites like Owl which will be fed by Seed. Owl has been up for more than a month and appears to be more of a design concept than anything else. But if it is not being used, why is it live? 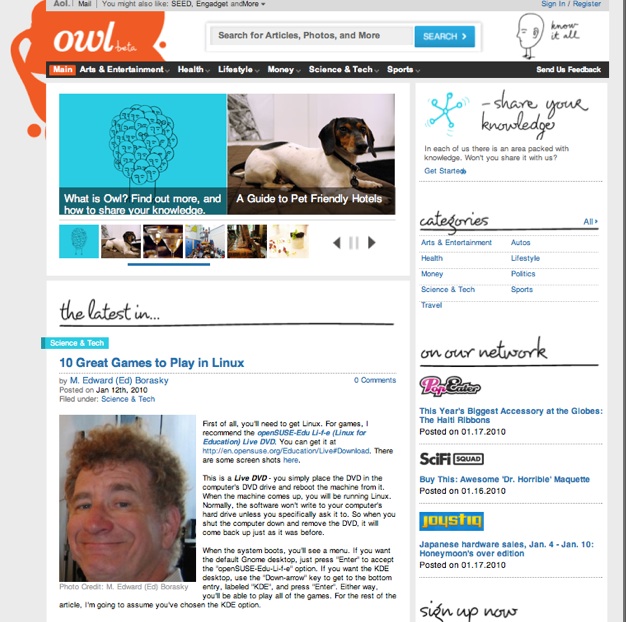