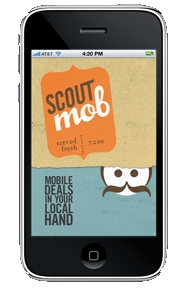 Some mobile startups do something that can’t be done online. Others copy an online business and bring it to mobile. And then there are companies like Scoutmob [iTunes link]. They take a great online business and make it ten times better by allowing you to take advantage of the service on-the-go.

Scoutmob is Woot on mobile, done on a local scale. Scoutmob provides location-aware coupons directly to your mobile device. They launch in Atlanta, and their first offer is for 50% off at Murphy’s, which is a 4-star restaurant according to Yelp. The offers, according to CEO Dave Payne, have a rapid expiration time (in this example, 24 hours), so you need to use the coupon within one day. They’ll have a different offer every day, so don’t weep if you can’t fly into Atlanta by midnight – you’ll be able to hit up Octane Coffee Bar and Lounge tomorrow.

For those of you who caught it, one obvious downside is “they launch in Atlanta.” That’s not to say Atlanta isn’t a cool place (hey, they brought us Coca-Cola and the Dirty Bird), but just that I doubt there are as many iPhone owners there as in San Francisco or New York City. That said, Dave’s existing business, SkyBlox, is a company that provides WiFi to 2,500 local businesses in Atlanta, so they’ve got an incumbent customer base to draw on for their offers. 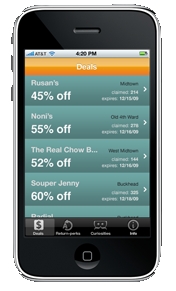 Scoutmob seems to be entering an interesting business at a great time. Real-time and location-based mobile apps are hot as balls right now, and the virtual coupon business is making headlines too. Of course, it’s also super crowded – as there are many location-aware coupon apps on the iPhone, including Yowza!, which has made headlines because its founder is Heroes star, Greg Grunberg.

An interesting side-story (and a knock against Scoutmob) is that Dave has no technical expertise himself and does not have a technical team to make or maintain the application. Instead, he outsourced the technology to a web developer friend from college who didn’t know Objective-C. How the hell did he make an iPhone app with Push, a native UI and geolocation with a web developer? He used Appcelerator‘s Titanium product, which enables web developers to create iPhone and Android applications. I’ve sat down with CEO Jeff Haynie, and Titanium, which is free, seems to be a cool way for web developers to create native-looking iPhone apps without having to code in Objective-C.

Scoutmob is available on the iTunes store and their first promotion is today.