After test-piloting a textbook rental program at three campus stores, Barnes & Noble College is rolling out the program more broadly to 25 U.S. colleges. Students will be able to rent textbooks from their campus bookstores, online, or from Barnes & Noble stores on campus. Students who want to rent online will be able to do so through their campus bookstore websites, such as Ohio State’s or the University of South Carolina’s.

Barnes & Noble is playing catch-up to Chegg, a startup which offers textbook rentals online to any student across the country. Chegg has raised $144 million in venture capital, dominates the budding textbook rental market, and is often whispered as a future IPO candidate. It claims on its Website that it has already saved students $100 million. Barnes & Noble, meanwhile is taking a campus-by-campus approach. The match-up is reminiscent of the battle with Amazon. Barnes & Noble is responding, but perhaps too slowly. Going from 3 to 25 campuses is not much of a competitive response.

Meanwhile, another startup, BookRenter, today announced new partnerships which expand its rental library to 3 million textbooks. It serves students across 5,000 campuses in the U.S., and says that it’s business is growing 300 percent a year.

Campus bookstores still have a lock on a lot of textbook purchases because professors order their books through those stores. But the rise of these rental options has students asking themselves why should they pay $150 for a textbook when they can rent one for $25 instead? As more students do the math, Barnes & Noble had better hurry up and roll out textbook rentals across all college campuses. 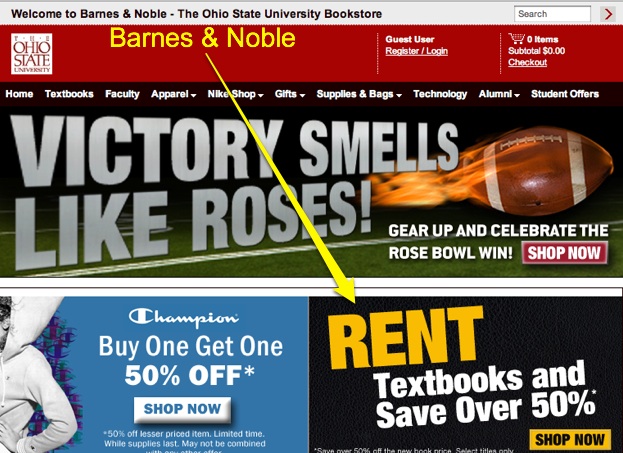