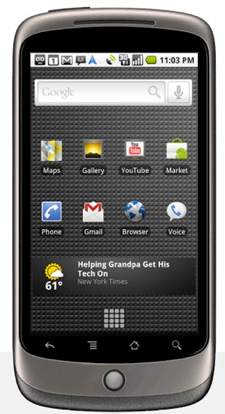 Earlier this week we saw the launch of the Google Nexus One, the second very high profile Android launch in as many months. And, as should be expected, the phone is drawing numerous comparisons to the iPhone — it seems you can’t find a related review, blog post, or tweet that isn’t gauging the device based on how it compares to Apple’s juggernaut. That’s as it should be. But for anyone considering making the jump to Android, you need to keep one thing in mind: many of these early adopters have been using their iPhones non-stop for years. And it takes days, if not weeks, to unlearn your iPhone habits and judge Android on its own merits.

Imagine if you took a longtime Windows user and sat them in front of a Mac for a couple days. They’d probably complain about superficial things like the change in mouse acceleration and the “unintuitive” button placement (the Close button is on the opposite side of the window). It’s not until a week or two after you start using a Mac as your primary computer that you overcome these issues and begin to fully grasp some of the benefits it offers. No, it may not be for you, but there’s really no way you can tell for sure without taking the plunge and using one as your primary computer. It’s the same way with Android.

I know, because I had the same experience when I made the leap from the iPhone to Android a few months ago. When I got my Droid, I was initially very pleased with it: the screen is amazing and the device flies. But as the luster wore off, I began to have my doubts. I couldn’t figure out how to access options that should have been readily visible. Menus weren’t where they should have been. All in all, Android made me feel stupid, because much of what I had learned about using the iPhone — habits that had become nearly instinct — no longer applied.

A week or so later, it clicked. When I want an option that isn’t already visible, I hit the dedicated ‘Menu’ button just beneath the screen. Need to jump to a previous screen in an app or the web browser? Hit the dedicated ‘Back’ button. In some ways, these are actually better than the soft buttons located in iPhone apps, because they’re always in the same place. It also saves some screen real estate. Using them has become totally second nature to me. But they aren’t the reason why I’ve decided I prefer Android over the iPhone.

Which brings me to the things that have turned me into a full-time Android user. Gmail on Android kicks the pants off of the iPhone’s Email client — something that I’m not the only person to notice. As someone who does a lot of Emailing, that makes a huge difference to me. Google Voice integration is fantastic. The ability to run multiple applications at the same time is a breath of fresh air. Those three things were enough to seal the deal.

Had I only used an Android device for a few days, these aforementioned pros may have been overshadowed by the fact that the phone felt so unfamiliar. Or I may have been turned off by one of the things Android gets wrong, like that there’s no way to update multiple applications at the same time and the default music player is remarkably ugly. But when it comes to using the phone in real life on a day-to-day basis, those problems aren’t enough to outweigh the productivity benefits Android offers me.

And, really, that’s my point. Many of these iPhone users who are testing out Android for the first time tend to get hung up on things that feel unfamiliar, or are griping about issues that will only affect them once in a blue moon. No, Android isn’t as pretty as the iPhone, and there are plenty of things it doesn’t do as well as it could. But until you’ve taken the plunge to see what lies beneath its less-polished exterior, you haven’t really seen what it has to offer.