For years, runners have been able to take advantage of Nike+, a nifty accessory that lets your iPod communicate with your shoes to turn it into a personal running coach of sorts. Soon, cyclists will have access to a tool that’s in the same vein as Nike+, but far more powerful. It’s called Pedal Brain, and it allows your iPhone or iPod Touch to receive and interpret data from a variety of exercise devices that use the ANT+ wireless protocol. ANT+ is used by cyclists (including many professionals) to accurately measure and analyze their performance over a ride, but until now there hasn’t been a way to connect these devices to your iPhone.

That’s where Pedal Brain comes in. The bootstrapped startup is making a small device called the Pedal Brain Synapse that plugs into your iPhone or iPod Touch and allows them to receive this data, which is then interpreted by an iPhone app. The application shows you how you’re performing in real-time (you’ll want to mount your iPhone in plain view) and can also use GPS to show the position of your team members. Once you’ve completed your ride, you’ll be able to log on to the Pedal Brain site to get more detailed analysis. The site will also have an integrated platform for coaches, so you sign up to get your own trainer to help plot your future rides and track your progress.

Pedal Brain founder Matt Bauer acknowledges that there are a handful of other cycling applications available for the iPhone, like Map My Ride, but says that these only offer basic data. That’s because they rely on your phone’s GPS for data, which can help gauge the distance you’ve travelled but can’t measure many of the things that ANT+ devices can. Bauer explains that power (in Watts) is a common metric used to gauge your progress, and can’t be accurately determined using GPS alone.

Pedal Brain’s iPhone/iPod accessory, which has already been approved by Apple, will be available through local bike shops this spring. The company is targeting a March release date and plans to sell the device for between $130 and $190. The online service will be subscription based, though users will be able to get a limited version for free (you won’t be able to track your data for longer than a couple weeks). 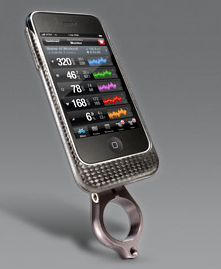